For the expansion pack, see Battlefield 1: They Shall Not Pass

They Shall Not Pass is a Codex Entry featured in Battlefield 1. It is unlocked upon completion of the singleplayer campaign on any difficulty.

THE FRENCH IN WORLD WAR 1Edit 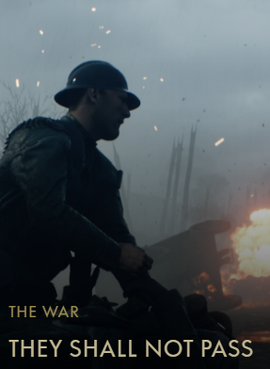 In 1871, France had suffered a humiliating defeat to Prussia and vowed that it would never happen again. To that end, France and Russia were fast allies in the fight to contain German ambitions. France had vastly expanded its rail network so, in case of an attack, soldiers could easily be transported from place to place, and indeed did fight the entire War on its own territory.

France learned quickly that old ideas did not work in modern war. They lost 28,000 men in a single day marching in formation in bright red uniforms against German machine guns. For France, the war was a struggle for survival against its most hated enemy.

Retrieved from "https://battlefield.fandom.com/wiki/They_Shall_Not_Pass_(Codex_Entry)?oldid=343435"
Community content is available under CC-BY-SA unless otherwise noted.