Connect with the main force:

Clear the highway to Tehran:

Thunder Run is the seventh mission in the singleplayer campaign of Battlefield 3. The player takes on the role of Jonathan Miller as the 1st Tank Battalion is crossing the Kavir Desert to rescue Henry Blackburn's squad in Tehran, Iran, some 200 kilometers away. During this mission the player engages PLR tanks and infantrymen using the M1A2 Abrams, A-10 Thunderbolts via an MAV drone and on foot while clearing a minefield.

The level begins with Jonathan Miller riding in the open hatch of his M1 Abrams tank, staring at the sky with a toy dinosaur from his son. After being brought back to attention by a crewmate, he watches as the Marine tank column cross the Kavir Desert. A pair of AH-1Z Vipers fly overhead as the tanks cross the desert, but soon rockets are fired from over a sand dune. A Marine identifies them as old Soviet BM-21s, but they appear to be no threat to the tank column.

As the Marine tanks push forward, the unit leader reports that scouts had sighted PLR tanks ahead of the Marines. Miller takes up his position as tank gunner and drives the tank forward.

The Marines continue their advance, pushing forward, but are halted by an artillery strike ahead of them.

Miller then switches to video feed from a MAV and lazes the enemy encampment housing the rocket artillery. Two A-10s perform a strafing run, with minimal damage.

Miller returns to his position while Ingham loads High Explosive Anti-Tank rounds. The tanks charge towards the enemy encampment at the berm, almost immediately losing Anvil 3-2 to artillery. The tanks destroy several enemy BMPs and foot soldiers, before reaching the other side of the encampment and destroying the rocket artillery battery which explodes with multiple secondaries in succession. After the battery is destroyed, AAV-7A1s deploy friendly infantry to the position.

Miller's unit reaches an enemy convoy with multiple enemy armored vehicles and infantry. The convoy is subsequently destroyed. The tanks drive to checkpoint 'Tarmac' while a B-1 bomber performs a run over a nearby position.

Ambush at Highway One[]

The Anvil unit reaches checkpoint 'Kilo', a highway lined with burnt-out military and civilian vehicles. Then they reach overpass 'Alter' where they are hailed by a USMC engineer. Miller gets out of the tank and meets with him on foot, equipped with an M4A1 carbine. The engineer tells Miller that his unit was ambushed by the PLR after laying minefield-clearing charges and were subsequently unable to detonate them. Anvil 3-4 and Miller's tank drive up to the frontline and cover Miller while he retrieves the clapper and detonates the charges, clearing the minefield.

He re-enters the tank, this time manning the M2 Browning machine gun on the top of the tank's turret and eliminating enemy infantry while they proceed towards the city. They come across a large amount of enemy infantry wielding RPGs and a tank at a petrol station which Miller promptly detonates with the machine gun, destroying the petrol station and tank consecutively.

Ambush at the Overpass[]

While approaching the overpass on the road to Tehran, Anvil 3-1 is destroyed by a Vehicle Borne Improvised Explosive Device (VBIED), a civilian car loaded with various explosives. The other tank commanders report a catastrophic kill, meaning the tank was completely destroyed. They halt under the underpass while Miller destroys four more VBIEDs and anti-tank infantry on the overpass. The tanks then proceed towards downtown Tehran after receiving a command for mission reorientation, followed by a B-1B flying by, signaling the beginning of the next mission. 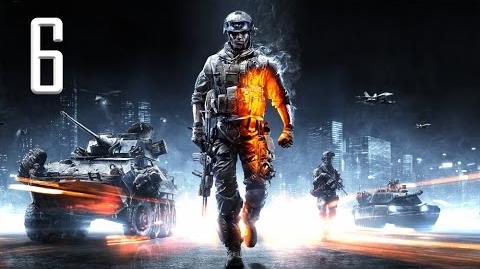