To Be Ace is a Codex Entry featured in Battlefield 1. It is unlocked upon finishing target practice in the chapter Test Flight of the Friends In High Places singleplayer mission. 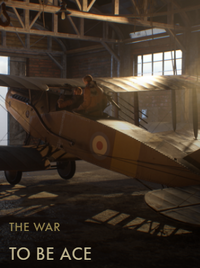 The art of flying airplanes was only a decade old as the war began. There were no established instructions for the first fighter pilots, so they had to simply learn flying by flying. Pilot training was often as dangerous as flying in combat.

All the warring nations had specialized training schools for their air squadrons by 1916, and lessons on how to climb more quickly in the air or how to do spiral turns of more than 45 degrees became standard. However, there was no substitute for experience. Many young pilots did not survive their first encounter with an enemy who may have had hundreds of hours of flight experience.

Retrieved from "https://battlefield.fandom.com/wiki/To_Be_Ace_(Codex_Entry)?oldid=343389"
Community content is available under CC-BY-SA unless otherwise noted.