Towards Cambrai is a Codex Entry featured in Battlefield 1. It is unlocked upon completing the singleplayer mission Through Mud and Blood. 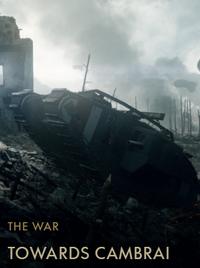 The 2nd Battle of Cambrai, from October 8th to 10th, 1918, was a swift attack of British forces against exhausted and thinly stretched German lines during the 100 Day Offensive. 25 infantry and cavalry divisions supported over 320 tanks, as well as aircraft and artillery, assaulted the German lines in overwhelming force. The rapid advance of the armored attack broke through in record time, and Canadian troops entered the city of Cambrai itself. In a brief urban combat engagement, they defeated the last German defenders.

Retrieved from "https://battlefield.fandom.com/wiki/Towards_Cambrai_(Codex_Entry)?oldid=343431"
Community content is available under CC-BY-SA unless otherwise noted.