A Tracer Dart Gun is an air gun that fires a radio transponder dart, allowing its user to remotely trace the location of the dart's target.

The TRCR-357 is a gadget issued to the Specialist kit in Battlefield: Bad Company. It is designed to fire transponders at vehicles in order to maintain an effective line-of-sight to the affected vehicle, as well as guide rocket projectiles toward it.

Those who placed a tracer dart will get a Tracer Dart Assist (+3 points), every time the affected vehicle is hit with a projectile. Two of these assists will award the "Tracer Dart Efficiency Trophy".

The TRCR-357 in Battlefield: Bad Company

"Designed to assist target acquisition, this gas powered pistol fires magnetic darts which latch onto enemy vehicles and aid in giving the selected anti-tank weapon an increased opportunity to hit the intended target."

The Tracer Dart is an all kit weapon, occupying the handgun slot, featured in Battlefield: Bad Company 2. Its use is largely unchanged from the previous installment, only being slightly different in appearance. The gadget is unlocked at level 11, or with immediately to those who own Limited or Ultimate editions of the game.

The Tracer Dart features a slight bullet drop and travel time though this only applies at longer distances, requiring users to aim and fire projectiles slightly above targets. Upon successfully tracing a target, players may then lock on to it with a shoulder-fired rocket or AT Launchers. To achieve a successful lock on a target, players must also aim slightly above it as the launchers also feature bullet drop.

Tracers can be removed from tagged vehicles by using the Smoke Countermeasures Package.

The Tracer Dart Gun at Laguna Presa in Rush.

The zoomed in view of the Tracer Dart Gun.

The Tracer Dart Gun at Arica Harbor in Rush.

An M2 Carl Gustav AT locked on to a planted tracer dart (red square).

A Russian Recon covered in tracer darts, as a result of "griefing"

A United States Army Engineer with the Tracer Dart Gun.

The Tracer Dart Gun is a gadget featured in Battlefield Play4Free, coming pre-unlocked for all kits. Essentially unchanged from previous installments, it allows players to tag enemy vehicles for all teammates to see. The gadget featured unlimited ammunition and is the secondary weapon for the gunner in Attack Helicopters. The gadget is also capable of one point of damage per hit to body parts and can kill low health enemy infantry with headshots. Vehicle countermeasures such as smoke, smoke grenades, or flares will remove a tracer dart from the vehicle.

An update on May 31st, 2011 increased the experience points to +10 for each successful hit with the dart.[1]

The Tracer Dart Gun being aimed

A 3D render of the Tracer Dart Gun in Battlefield Play4Free, showing the front portion of the gun.

A second render of the Tracer Dart Gun in Battlefield Play4Free, showing the gun from side.

A third of the Tracer Dart Gun in Battlefield Play4Free, showing the rear of the gun.

Reloading the gun in the third person view

The Tracking Dart is a redesigned Tracer Dart Gun featured in Battlefield Hardline. The gadget is available for all kits and takes up the Handgun slot.

The Tracking Dart is unavailable for the player to use in the singleplayer campaign. However, it is used by Khai Minh Dao in the episode Gator Bait to tag the floating drug bales in the swamp.

The Tracking Dart is available for all classes to use. Like previous iterations of the weapon, the gun fires a magnetic dart that can stick to vehicles. It can be used on both enemy vehicles and players, which creates a red silhouette on them once struck by a dart, lasting a total of thirty seconds. Afterwards, the silhouette can then be seen by the entire team, even through walls and objects.

Similar to Battlefield Play4Free, the Tracking Dart can be aimed down to sights, with the gadget also given the ability to have a red dot sight equipped. The Tracking Dart features a slight bullet drop that is only noticeable at smaller distances. Upon successfully tracking a target, it may then be locked on to by shoulder-fired missiles and AT launchers. The gadgets effectiveness is extremely reduced compared to previous iterations since missiles are now Battle Pickups.

Despite being ineffective as a weapon against players, the Tracking Dart applies 3% damage to enemy players. 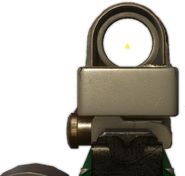 Aiming with its Reflex sight

The Beta image of the Tracking Dart

1 rounds
"A gas-powered pistol that fires a magnetic dart that attaches to enemy vehicles/personnel and assists in accuracy on target when using certain missiles."

The Tracer Dart Gun is a weapon appeared in Battlefield 2042. Available in the Battlefield Portal, it functions in a similar manner to it's counterpart in Battlefield: Bad Company 2.