Not to be confused with the similarly named Codex, Trench Raiding (Codex Entry)
For the Elite class, see Trench Raider

Trench Raider is a Codex Entry featured in Battlefield 1. Introduced in the They Shall Not Pass expansion. It is unlocked after obtaining ten kills with the Trench Raider Elite Class. 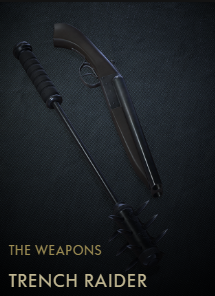 After the western front had solidified into trenches at the end of 1914, soldiers had to deal with everyday life, routine and boredom in close proximity to the enemy lines. This situation gave rise to the "live-and-let-live system", a kind of unspoken truce between the opposing sides, minimizing the unnecessary aggression to increase the chances to survive. Military commanders wanted their soldiers to fight a war, however, and saw the "live-and-let-live system" as a huge threat to the chances of achieving their war aims. In order to break it the commanders Instituted a form of ceaseless aggression - trench raiding.

Trench raids were carefully planned small-scale attacks, usually performed at night and involving somewhere between 10 and 200 men. The raids had several military objectives, like capturing enemy officers or documents like maps for intelligence, and reconnaissance for their morale, and as planned the "live-and-let-live system" quickly crumbled from the perpetual attacks.

Trench raiders would often blacken their faces using burnt cork and use various camouflage to blend in while crawling through no man's land. They would stealthily cut through barbed wire, pass obstacles, and attempt to sneak up on enemy sentries unseen and kill them quietly. The raiders would then proceed with their objectives and quickly get back to their own lines with prisoners or other booty, hopefully without the enemy ever being alerted. Sometimes explosive charges with time fuses would be set to blow up enemy dugouts after the raiders had left.

In this stealthy close quarters combat, raiders preferred compact firearms like pistols, revolvers, and shotgun and often carried satchels with grenades - but the main armament of choice were melee weapons. Trench raiding brought back a medieval element to WW1, with raiders wielding swords, maces, clubs, hatchets, knuckle dusters and sharpened trench shovels. Even body armor reappeared, with all sides experimenting with a huge variety of models. Body armor was primarily intended for sentries and machine gunners, but some trench raiders carried the lighter models.

Military observers around the world had studied the Russo-Japanese war and noticed the advantage Japanese soldiers had in trench fighting because of their Jujutsu training, and in the years before WW1 many armies had begun incorporating martial arts in their training programs. The trench raiding put even more focus on hand-to-hand combat, including boxing, wrestling and fencing. By 1916 all of the belligerents had training and manuals for unarmed combat, with the French Army having one of the most extensive programs based on Jujutsu and the French street-fighting technique Savate.

The trench raiding focusing on Infiltration and close quarters combat influenced the storm trooper tactics of all belligerents, with the Italian Arditi taking the medieval martial arts manual of Flore del Libert to heart. The hand-to-hand combat leanings from the trenches would lay the foundation for modern combatives.

Retrieved from "https://battlefield.fandom.com/wiki/Trench_Raider_(Codex_Entry)?oldid=343206"
Community content is available under CC-BY-SA unless otherwise noted.