Trench Raiding is a Codex Entry featured in Battlefield 1. It is unlocked upon winning one game of Rush. 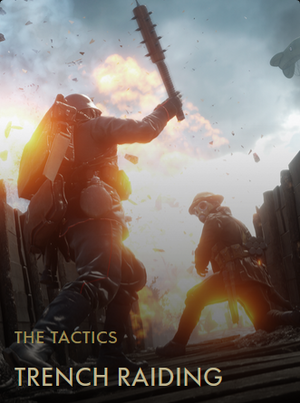 Intelligence about the identity and strength of the enemy on the other side of the battlefield was crucial for commanding officers, and they sent out trench-raiding parties to gather information and prisoners. They were the first squad-like infantry groups to work in team where everyone had a specific role. Some men carried nothing but rifles and ammunition while others carried large hoversacks full of grenades, or brought wire cutters to open up gaps in the enemy's barbed wire. During the dark of night, these combat patrols would silently crawl through no man's lands. Once the wire was cut, they would then proceed to noiselessly take out the guards and get into position. then all hell broke loose as the raiders hurled dozens of grenades into the trenches and dugouts, causing as much damage and confusion, they would grab terror-stricken men and drag them as prisoners back to their own lines. It was a very dangerous job and many trench-raiding attempts failed, thanks to listening posts or watchful sentinels.

One of the most famous trench raids was by the 12th East Survey Regiment, who assaulted a German trench system known as "the Fort". They successfully bombed the machine gun dugouts and killed the defenders, leaving nothing but a black handprint on a wooden board. That raid was known as the Black Hand Raid, and it soon became a nickname for extraordinary dangerous raiding tasks.

Retrieved from "https://battlefield.fandom.com/wiki/Trench_Raiding_(Codex_Entry)?oldid=343359"
Community content is available under CC-BY-SA unless otherwise noted.