Trench Runners is a Codex Entry featured in Battlefield 1. It is unlocked upon collecting all Field Manuals in the chapter The Runner of the singleplayer mission The Runner. 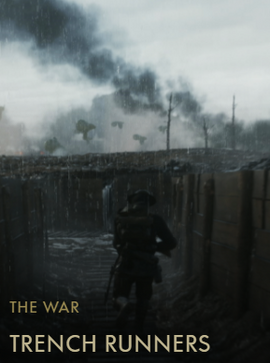 Speeding through the trenches in constant danger, they were the messengers of the Great War. Trench runners would deliver messages from one command post to another if communication lines were destroyed or if a unit was cut off.

Often working in pairs, they memorized every trench route and every minute detail of their sections in order to move as quickly as possible. Runners would familiarize themselves with the trench systems to such a degree that they could lead new groups of soldiers safely through the maze of trenches and dug-outs to the forward lines under cover of the night.

To effectively do their jobs, they were trained in reconnaissance and encryption, were physically and mentally fit and reliable, and were able to use all means of communications, including pigeon handling.

Retrieved from "https://battlefield.fandom.com/wiki/Trench_Runners_(Codex_Entry)?oldid=343426"
Community content is available under CC-BY-SA unless otherwise noted.