For the Japanese Patrol Boat of the same designation, see Type 38

The Type 38 rifle (三八式歩兵铳 san-hachi-shiki hoheijū), sometimes referred to as the Arisaka, was a bolt-action rifle used by Imperial Japanese Army in 1905 (the 38th year of the Meiji period, hence "Type 38") and served from then until the end of 1945. It was designed by Major Kijirō Nambu who used the Type 30 rifle (an actual rifle designed by Colonel Arisaka Nariakira) as the base for a redesign. Nambu reduced the number of parts making up the Type 30's bolt from nine to six and at that same time simplified manufacture and disassembly of the bolt without the need of tools. A dust cover was added because of experiences in the Russo-Japanese War that left rifles inoperable from dust.

During World War I, many Type 38 rifles were bought by nations who faced a shortage of weapons, which included Russia, Great Britain, and France. The rifle would eventually go on to see action in the Russian Civil War, World War II, and other later conflicts.

This item has a Codex entry: Type 38 Arisaka

"Adopted by the Imperial Japanese Army as their standard issue rifle, large numbers of Arisaka rifles were purchased by allies short on arms during WWI, including Britain, France and Russia."

The Type 38 Arisaka is a weapon that was introduced in Battlefield 1: Turning Tides expansion for the Scout class.[2]

The Type 38 Arisaka has the shortest sweet spot of the single-action rifles, excluding the Martini-Henry and the Vetterli-Vitali M1870/87 black powder rifles. In general, the Type 38 Arisaka is almost statistically identical to the SMLE MKIII. However the Arisaka's sweet spot origin is 10 meters closer than the SMLE, making it suited to a close to mid range rifle. The Arisaka also has a slightly higher rate of fire of an extra 5 rounds per minute, and has more accurate bullet travel, as the Arisaka has a bullet velocity of 770m/s with a drag coefficient of .0002 similar to the M1903, compared to the 740 m/s and drag coefficient of .00025 of the SMLE MKIII. However, the SMLE has a larger magazine capacity and a slower empty reload speed, which can surpass the reload speed of the Arisaka if the player decides to load only one clip into the SMLE, of which the reload time is shortened to 3.633 seconds, minutely faster than the Arisaka. The individual bullet reloads of the SMLE are also noticeably quicker than the individual bullet reloads of the Arisaka.

There are two variants of the Type 38 Arisaka. The Infantry variant is the base version with iron sights. The Patrol variant, added in the Weapon Crate update on May 7 2018, features a medium power scope and improved accuracy when moving.

As with the Mosin-Nagant M91, Obrez Pistol, Vetterli-Vitali M1870/87 and Carcano M91 Carbine, the Type 38 Arisaka has unique reloads depending on the amount of bullets left in the clip: 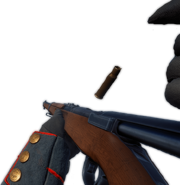