Type 38 Arisaka is a Codex Entry featured in Battlefield 1, introduced in the Turning Tides expansion. It is unlocked upon obtaining 10 kills with the Type 38 Arisaka. 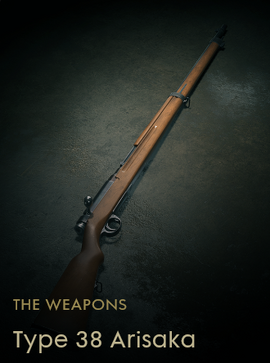 During the Russo-Japanese war of 1904-05, the Imperial Japanese Army used the Type 30 rifle, designed in 1897 by a commission led by Colonel Nariake Arisaka, but this weapon showed various reliability problems during the war. This led to the Type 30 being redesigned by Major Kijiro Nambu into the Type 38, which was adopted by the Japanese army in 1905 (the 38th year of the Meiji period). It was a bolt-action rifle, loaded with the relatively mild 6.5x50SR cartridge from 5-round clips. Based on earlier experience with harsh conditions, the Type 38 was equipped with a sliding bolt cover to protect the internal mechanism, but this cover would tend to rattle and was often removed by soldiers.

Retrieved from "https://battlefield.fandom.com/wiki/Type_38_Arisaka_(Codex_Entry)?oldid=343241"
Community content is available under CC-BY-SA unless otherwise noted.