"You know how I spend my day? Spreadsheets. I haven't been a street guy in a long time"

— Tyson to Nick and Khai

Tyson Latchford is a character featured in Battlefield Hardline. Born in Miami and spending his youth slinging cocaine with Tap Milstein, Latchford found that he was more than capable of getting off the streets, but used his intellect to manipulate others to perform his crimes for him, keeping his hands clean in the process. Becoming an upper middle-class criminal who "spends more time with spreadsheets than scales and gram bags", Latchford's main concern is to make sure the drugs get to where they're supposed to go; after that it's someone else's problem. When he's not working, Tyson imagines himself taking up golf.[1][2]

Tyson Latchford was born in Miami, Florida. During his years was close friends to "Tap" Milstein, he intentionally started during cocaine and started a market of running, he later built a huge amount of wealth in cocaine. He later made an HQ in Miami, being known by those who ran into him as "middle class criminal". During that time, he met and went on two dates with Detective Khai Minh Dao whom he later broke up with upon finding out she was a cop when she arrested him .

A hit was later put on Tyson, prompting him to lay low from both Law Enforcement and criminals alike, though he still sold illegal drugs.

Tyson was brought to the attention of the police when Sergeant Carl Stoddard and Detective Nicholas Mendoza came across his drugs during a bust go array. Tyson, knowing he was being followed, set up a web cam at his drug HQ and stayed in his house across Miami. When Khai and Mendoza got TAP to lead them to his web cam, armed men arrive and kill all of Tyson's men. Subduing the armed men, Nick and Khai trace Tyson's location through his webcam and arrive at his house before more men assault the building in a last ditch attempt to kill Tyson. While successful in protecting Tyson, Khai is shot and almost dies from blood loss, deeply troubling Tyson. Tyson brought into custody soon after.

Three years later following the false arrest of Nick Mendoza, Julian Dawes had finally betrayed Khai. This lead her to enlist the help of Tyson and TAP in breaking Nick out of prison so that they could take Dawes down once and for all. With his drug distribution ruined three years before, Tyson was more than happy to help. After sabotaging the prison bus Nick and TAP were held on, Tyson met Nick at the nearby water tower and had him contact Khai via flashing light. Tyson also explains the reason TAP stayed behind to go back to prison was because he owed him a favor for leading the police to him years before and that prison was a great place to break a cocaine addiction. After avoiding the police, the two men made it to Khai who then explained the situation to Nick. Left with no other choice, Nick decided to help take down the man responsible for ruining his life.

Tyson later accompanied Nick to a Los Angeles car dealer ship run by Henry Kang in order to obtain information and Dawes' expansion of his criminal empire west. After escaping the dealership, Tyson provided cover for Nick as he entered Kang's warehouse in order to rescue Marcus Boone and retrieve his gathered intelligence. Afterwards, the three of them engaged Kang's men in a car chase before finally escaping. Knowing that Kang had a huge connection to Dawes, the three men decided to take Kang and his organization down and where ultimately successful in doing so.

After Nick and Boomer retrieved the Brute from Tony Alperts compound, the group proceeded to devise their plan to assault Dawes penthouse and break into his safe. Unknown to them, Stoddard had found their location and soon took Tyson captive. After angering Stoddard however, it left Stoddard open to be shot and killed by Nick.

Returning to their planning, Boomer devised one that involved blowing a water pipe leading to Dawe's pool, which would then flood the elevator shaft, allowing Nick and Khai to swim up it, into the penthouse. Tyson disguised himself as a "hard working window washer" in order to find the necessary pipe. He then met Nick and Khai at the penthouse and helped defend it as Preferred Outcomes stormed the building. Successful in fending them off, the Brute finishes cracking the safe, much to Tyson delight as he proceeds to open it.

Unfortunately, however, Dawes had already removed his money from the safe and lined it with explosives which blew the moment Tyson opened the safe. The ensuing blast heavy injured Tyson, with his flak vest having barely saved his life. As more Preferred Outcomes mercenaries showed up, Khai put an unconscious Tyson on a newly erected zip line and sent him down to be caught by Boomer. Once the group was able to escape via speed boat, Nick proceeded to drive toward Santa Rosata Island off the coast which Dawes had revealed to be his location.

Upon reaching the dock, Nick told the others of how he had to finish this by himself, despite protests from Khai who wanted to join him. Nick dismissed these comments, stating that Tyson needed medical attention and since Boomer did not have the black market doctor connections that Khai did, she need to stay with him. Otherwise the only other option would be taking him to a real hospital which would result in Tyson getting arrested. Seeing the truth in Nick's words, Khai decided to stay with Tyson and Boomer and wished Nick luck as he attempted to end Dawes once and for all.

"Well, I'll say this: for a former cop, Dawes has taste."

Tyson is an intelligent, dry-witted, cunning, and middle class former criminal who knows the streets better than anyone. While lacking the technical expertise that Boomer has, Tyson supplies the team with information regarding drug criminals from his rich business network and is adept at infiltration and espionage. Despite being a criminal, he shows some good nature, such as protecting Khai being a corrupted officer, and saving Mendoza in Gauntlet. He seems to get along with anyone who is no threat, and shows no respect for the law, such as calling Nick "detective" and not being afraid of SWAT team. It is shown that Tyson has an appreciation and interest in high-end, luxurious lifestyles, or as he puts it "the finer things in life", thus explaining his decision to move his drug businesses to rich clients in order to earn big money. Unfortunately, his greed for wealth usually becomes his downfall and in more than occasion, costed his life, as evident in Out of Business. Also, his lack of armed and combat training often results in Tyson falling victim to endangering situations, and on one occasion, causing him to be gravely injured.

It can be said that Tyson is a natural charmer, as observed from the way he speaks and carries himself. As revealed by Khai, Tyson briefly dated her prior to the events of the game and was assumed to have had a relationship with her before Khai decided to break it off during the events of the game. Despite that, both continue to show affections for one another.

Tyson being confronted by SWAT 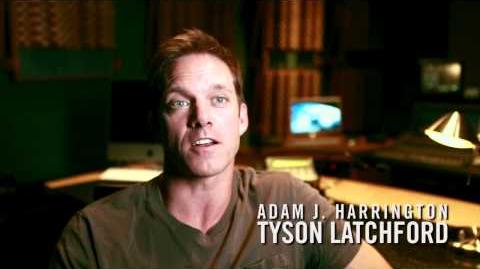 Khai with an injured Tyson.
Add a photo to this gallery

Retrieved from "https://battlefield.fandom.com/wiki/Tyson_Latchford?oldid=358388"
Community content is available under CC-BY-SA unless otherwise noted.