An Unmanned Aerial Vehicle (UAV), commonly known as a drone, is an aircraft without a human pilot aboard. The flight of UAVs may be controlled with various kinds of autonomy: either by a given degree of remote control from an operator, located on the ground or in another vehicle, or fully autonomously, by onboard computers.[1]

The UAV is a commander ability in the Battlefield Series, providing 55 seconds of 'radar', enabling all teammates to see the location of enemy units within its limited radius.

In Battlefield 2, the UAV itself was originally invisible, however in the 1.2 patch, the UAVs became both visible and vulnerable to ground fire. Although unlike other aircraft, it is almost impossible to shoot down a UAV with anything other than mobile AA. The UAV is based on the American RQ-1 Predator A Drone.

The UAV depends on a small hut/trailer for it to work, usually located in or near the team's starting spawnpoint (which may or may not be a capturable, depending on the map). The hut can be destroyed with 2 packs of C4 dropped by a Special Forces player. Once destroyed, either commander is unable to use the UAV until a team member repairs it or a supply crate is dropped near it for repairs.

The UAV used for Battlefield 2142 is based on a flying wing design, similar to the US B-2 Spirit strategic stealth bomber.

On the rare occasion that a player is in proximity of the actual UAV (and the even rarer occasion that the drone has glitched and is traveling low on the ground), the UAV can crush players against walls or push them off rooftops.

The UAV is vulnerable to anti-aircraft weaponry, and less so to infantry firearms. UAVs can be targeted and destroyed by either team. Because the owner of the UAV is not shown (other than through guesswork), players risk shooting down their own team's UAV. 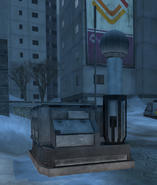 The UAV Scanner Station in Battlefield 2142.

The UAV Drone in Battlefield 2142.

None (Recharge required per use)

Reveals all enemy infantry, vehicles and equipment within the effective radius

The UAV returns in Battlefield 4 as the Scan UAV, functioning similar to the UAV featured in Battlefield 2. It circles around selected areas and reveals the location of any hostile infantry of vehicles within the vicinity to the entire team's minimap. It is the fastest recharging asset available to the commander. The UAV is vulnerable to ground & air cannon, missile and rocket fire. Friendly Scan/EMP UAV have a strobing green indicator light to indicate friendly assets, while enemy commander asset Scan/EMP UAVs have a strobing red indicator light.

The UAV is also available in the Test Range, serving as an unmanned target drone. 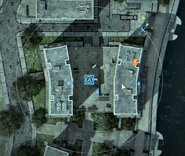 GPS Spotting is a hacker resource featured in Battlefield Hardline. It functions in a similar manner to the Scan UAV from Battlefield 4, revealing the location of any enemies in the vicinity to the entire team. Upon unlocking version 2.0, the affected area is increased.