The UH-60 Black Hawk is a four-bladed, twin-engine, medium-lift utility helicopter manufactured by Sikorsky Aircraft. Originally known as the Sikorsky S-70, it won a contest to be designated the UH-60 Black Hawk and spawning a large family in U.S. military service. New and improved versions of the UH-60 have been developed since. Civilian versions, and some military versions are produced under various S-70 model designations.

The UH-60A Black Hawk entered service with the United States Army in 1979, to replace the Bell UH-1 Iroquois as the Army's tactical transport helicopter. This was followed by the fielding of electronic warfare and special operations variants of the Black Hawk. Improved UH-60L and UH-60M utility variants have also been developed. Modified versions have also been developed for the U.S. Navy, Air Force, and Coast Guard. In addition to U.S. Army use, the UH-60 family has been exported to several nations. Black Hawks have served in combat during conflicts in Grenada, Panama, Iraq, Somalia, the Balkans, Afghanistan, and other areas in the Middle East.

The Black Hawk is featured in Battlefield 2 as the USMC's transport helicopter. It has a crew of three (the pilot and two door gunners) and can hold up to three passengers (two sitting on either edge of the helicopter, one facing the right-hand side door).

Compared to its counterparts such as PLA's Z-8 and MEC's Mi-8, the Black Hawk is more agile to fly. The weapons armament of the Black Hawk is better than its counterparts as it features a GE M134 minigun which has a much better fire rate, and will absolutely shred infantry, and destroy light armored vehicles in seconds. It is also less tall than the other transport helicopters, hence it has a better chance of escaping/evading oncoming SRAW and other guided anti tank missiles. Like other transport helicopters of its class, it can take three AA missiles from enemy fighter jets before blowing up. So even though it is much stronger than other aircrafts, flares must be used cautiously.

A render of the Black Hawk

Cockpit view of the Black Hawk

Gunner's view of the Black Hawk

The UH-60L is a five-seater, well armored Helicopter that packs a huge firepower: 2 M134 miniguns and the weapons of the 2 passengers. The pilot has access to rockets and side-mounted miniguns.

The UH-60 Black Hawk in Battlefield: Bad Company is seen in the singleplayer campaign, however the player cannot interact with it in any way.

It is seen in the beginning cutscene of Welcome to Bad Company, transporting Marlowe, Sweetwater and Haggard to rejoin Sergeant Redford. Another Black Hawk, call sign Super Six Five during the mission in order to extract the squad, but is shot down by nearby anti-air fire.

It is seen most prominently in the mission Par for the Course, at the beginning, the player will see it sitting behind them. It is indestructible and has no one in it. At the first cutscene, the same Black Hawk is seen flying over a golf course and being shot down by anti-air guns, affirming the hostility of Serdaristan to the United States.

Firing the M134 Dillon Minigun
"Designated as a Utility Tactical Transport Aircraft System (UTTAS) the UH-60 is armed with 2 x 7.62mm M134 Miniguns, operated by a crew of 2 and can transport 3 full armed troops."

The UH-60 Transport in Battlefield: Bad Company 2 can now be used by the player and is available for use in multiplayer. It has a crew of three, (one Pilot, two Gunners), and can hold an additional two sitting over the sides firing their class weapons. The UH-60 appears in the maps Port Valdez, Isla Inocentes, Valparaiso and Heavy Metal.

The Black Hawk is armed with two main M134 Dillon Miniguns attached to the side of the helicopter, and two positions for two players to fire their regular weapons out the side opening. Engineers can also repair the helicopter midflight.

The UH-60 Black Hawk docked at the US base on Port Valdez in Rush mode. 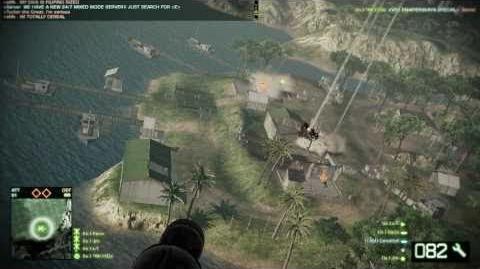 Battlefield Play4Free game files
The UH-60 is featured in the maps Oman and Dalian Plant as the American transport helicopter. One spawns very often on the USS Essex and its Russian counterpart is the Mi-17 Hip. The Black Hawk can hold up to 5 people. Also, a wreckage of the UH-60 can be found near Flag B in Sharqi.

It carries two coaxial gatling guns (one on each side) and currently stands on 1000 HP. The UH-60 is a very effective vehicle for capturing flags due to the amount of passengers in the vehicle, but to drive the helicopter a person must have spent one training point in Helicopter Piloting Training

The Transport Helicopter seen in the "Into the Jungle" trailer. Note its lack of miniguns as the side doors are closed and the different paint job

The UH-60 Transport is a vehicle featured in Battlefield 2042. Available exclusively in the Battlefield Portal, it functions in a similar manner to it's counterpart in Battlefield: Bad Company 2.