The UMP is a blowback-operated, magazine-fed submachine gun firing from a closed bolt.

As originally designed, the UMP is chambered for larger cartridges than other submachine guns like the MP5, to provide more stopping power against unarmored targets (with a slightly lower effective range) than the 9x19mm MP5 provides. A larger cartridge produces more recoil, and makes control more difficult in fully automatic firing. To mitigate this, the cyclic rate of fire was reduced 600 rounds/min for the UMP-45, which makes it one of the slower firing submachine guns on the market. There's also a version chambered for the rather standard 9x19mm Parabellum, known as the UMP-9.

The UMP .45 is featured in Battlefield 2: Modern Combat as the main weapon of the EU Spec Ops kit. It has decent accuracy, a high fire rate, and moderate damage.

The UMP-45 in Battlefield 2: Modern Combat (PlayStation 2)
Add a photo to this gallery

Short-Mid
"This German submachine gun was developed mainly for the American law enforcement market. Very light weight and highly customizable, the UMP is a cheaper, but still powerful, alternative to the MP5. "

The UMP is a weapon featured in Battlefield: Bad Company, issued to the Specialist kit as an unlockable costing one unlock credit. It has 60-round magazine and 180 rounds in reserve, as with all Specialist-exclusive weapons. It has a has a moderate rate of fire, high damage and mediocre accuracy, however, compared to the other compact assault rifles in the game, it has the lowest rate of fire, the highest damage per bullet and the highest accuracy.

There is a UMP Trophy and is unlocked by achieving 6 kills with the UMP in one game. This trophy when awarded, is usually accompanied by the "Compact Assault Rifle Efficiency" Trophy.

The UMP in Battlefield: Bad Company in the multiplayer map Acta Non Verba

The UMP being aimed 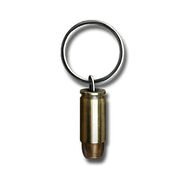 The UMP Trophy
Add a photo to this gallery

"This German built, 25 round, fully automatic submachine gun is noted for its versatility, optimal mobility and silencer, making it a suitable choice for ground forces engaged in close quarter combat."

The UMP-45 is a weapon featured in Battlefield: Bad Company 2 as the 7th and last submachine gun issued to the Engineer kit requiring 43000 experience points to unlock. It has a 25-round magazine, low recoil, decent damage and good accuracy. Compared to the other SMGs, it has higher power and higher accuracy, which is advantageous at longer ranges, but its lower rate of fire is a nuisance in close quarters. It can use a Red dot sight and 4X Rifle Scope.

While the weapon does have arguably obstructive iron sights, the lack of recoil and muzzle flash can reduce the need for a red dot sight at close range. It has exactly the same damage and rate of fire as the SCAR-L Carbine, but trades 5 rounds for less recoil and tighter spread. Players may face a dilemma when choosing the better submachine gun of the two.

The UMP-45 SA's in-game description and stats evaluation.
Add a photo to this gallery

The UMP-45 at Oasis in Rush

The UMP-45 at Isla Inocentes in Rush 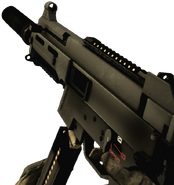 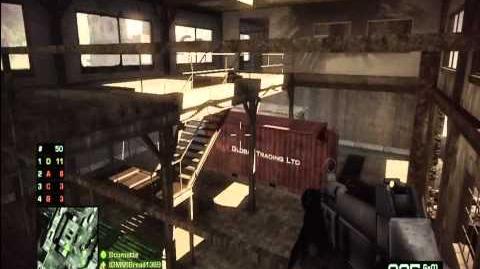 UMP-45
Gameplay with the UMP-45 in Battlefield: Bad Company 2 at Panama Canal in Conquest mode 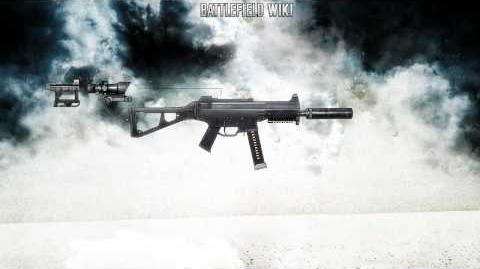 "The unique camouflaged SPECACT personal UMP-45 gives you a visual edge on the Battlefield, showing that you're a force to be reckoned with."

The UMP-45 SA is also available to those who purchased the SPECACT DLC on Xbox at 160 Microsoft Points or PS3 at $1.99. It is the UMP-45 customized with either Desert, Woodland, or Arctic camouflage depending on what environment the player is in. The SPECACT DLC has been released as downloadable content for the PC on 1 December via the EA Store and on Steam.

The UMP-45 SA at Oasis in Rush

Battlefield Play4Free Comparison Tools
"The German built, 25 round, fully automatic sub machine gun is noted for its versatility and optimal mobility, making it a suitable choice for forces engaged in close quarters combat."

The UMP-45 is a weapon featured in Battlefield Play4Free as a purchasable submachine gun for the Engineer kit. When using the UMP45 features lower-than-average recoil, moderate damage, moderate deviation and above average range.

The UMP45 performs in similar regard to the PDW-R, but differs in that it has a more even damage spread over range. The weapon also features lower recoil that most SMGs, allowing it to stay on targets even at medium ranges.

The UMP45 at Oman in Battlefield Play4Free

More detailed look upon the UMP45 in Battlefield Play4Free

UMP-45 desert camo
Add a photo to this gallery

The UMP45 is a weapon featured in Battlefield 3.

The PLR forces use the UMP-45 without accessories. Several PLR insurgents are seen using it on the first section of the first mission Semper Fidelis, but due to gameplay reasons, they cannot be picked-up on the said section. They can only be picked up starting in the third mission, Uprising, wherein it reappears as a weapon of the PLR. It also appears in Operation Guillotine in the hands of nameless USMC soldiers. Misfit 1-3 is randomly generated with them in Fear No Evil. Lastly, as in the flashback mission, the UMP-45 can be picked up in the last mission, The Great Destroyer.

During the Co-op campaign it is found in Hit and Run without accessories. It can also be found on National Police and some PLR in Drop 'Em Like Liquid.

The UMP-45 is unlocked at Rank 16 and is classified as a PDW (Personal Defense Weapon). It has a 25+1 capacity and a moderate rate of fire, recoil and very high stopping power compared to the other PDW's, capable of taking an enemy down within 3-8 shots, even in medium range. The UMP-45, P90, and PP-19 are the only PDW's that do not unlock the Extended Magazine attachment, but instead gains the Flash Suppressor.

Battlefield Premium members have access to the Navy Blue Digital camouflage for the UMP-45 or the Berkut camo if they have completed the UMP-45 Specialist assignment. 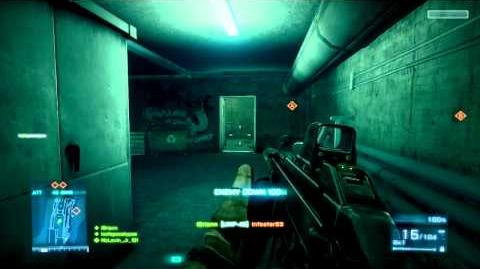 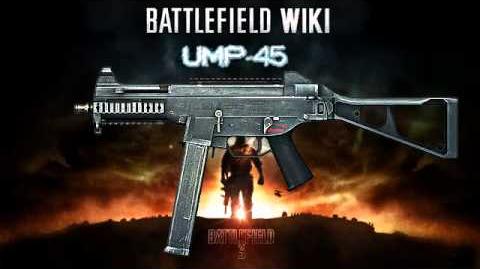 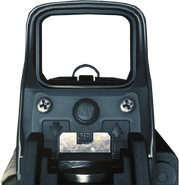 Aiming down sights of UMP-45 with assorted attachments

UMP-45's Iron sights
Add a photo to this gallery

The UMP-45 appears as one of four selectable primary weapons in Battlefield 3: Aftershock. The gun holds 25 round per magazine and the total ammo count for the gun is 150 rounds.

The UMP-45 in Battlefield 3: Aftershock.

The UMP-45 in the weapon selection screen.
Add a photo to this gallery

Two variants of the UMP appear in Battlefield 4. The two weapons function fairly similarly, and are both Engineer-exclusive personal defense weapons. Due to caliber sizes, the primary differences between the two are that the UMP-45 both hits and kicks harder, while the UMP-9 possesses a slightly larger magazine and better handling characteristics. The UMP-45 also makes an appearance in both the single and multiplayer aspects of Battlefield 4, whereas the UMP-9 only appears in multiplayer.

The UMP-45 appears in Battlefield 4 as a Personal Defense Weapon.

The UMP-45 is used by Tombstone in the mission Shanghai. Afterwards, it can be equipped at any Weapon Crate. It's equipped with a Reflex, Heavy Barrel and Angled Grip. It has no camouflage equipped.

The UMP-45 is the second PDW unlocked for the Engineer Kit. It remains a powerful weapon at close range, and also has good damage across range while maintaining controllable recoil, with a moderate vertical muzzle climb.

Before the Fall patch, its low velocity of 320 m/s is worsened to 180 m/s with a Suppressor, reducing its effectiveness at range, as the player will have to lead the target to compensate it.

After the Fall patch, its suppressed velocity has been increased from 180 m/s to 270 m/s, reducing velocity compensation required to hit the opponent. Its side-to-side recoil is also tied to UMP-9.

Hitting the bolt release during an empty reload

The UMP-45 in Shanghai.
Add a photo to this gallery

The UMP-9 is a PDW featured in Battlefield 4. It is unlocked upon the completion of the Engineer Expert gold tier assignment. It is slightly different than the UMP-45, with a curved magazine and a higher fire rate. It shares the same reload animation as UMP-45.

When compared to the UMP-45, the UMP-9 features a fire rate increase of 100 rpm, 5 more rounds in a magazine, a higher bullet velocity, and less recoil, but at the cost of reduced damage per shot, due to the UMP-9 being chambered with 9x19mm Parabellum, which lacks the stopping power of the .45 ACP. 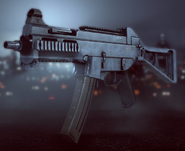 Hitting the bolt release during an empty reload

Like in Battlefield 4, two variants of the UMP appear in Battlefield Hardline: the UMP-45 and the UMP-9 introduced with Getaway. Like their counterparts, the primary differences between the two are damage, recoil, and magazine capacity, as they both handle similarly and are exclusive to the Mechanic kit. The UMP-45 also appears in singleplayer, while the UMP-9 is multiplayer exclusive.

78 + 26 rounds (SP)
"The UMP-45 was originally designed as a counterpart to the MP5 to provide more stopping power. The .45 caliber round hits hard, but makes it more difficult to control."

The UMP-45 is a weapon featured in Battlefield Hardline. It is an available Submachine gun for the Criminal Mechanic kit and comes equipped with a Holo sight and Laser sight. The UMP does more damage than the other weapons available to Mechanic, but has a smaller magazine capacity, a slower fire rate, and more recoil than most of the other sub-machine guns.

The UMP-45
Add a photo to this gallery

The UMP-9 is a weapon set to be included in the Battlefield Hardline: Getaway expansion, exclusive to the Mechanic kit.

Retrieved from "https://battlefield.fandom.com/wiki/UMP?oldid=372146"
Community content is available under CC-BY-SA unless otherwise noted.