The USAS-12 is a modern Korean-made, fully automatic, gas-operated, fully-ambidextrous 12-gauge shotgun developed during the 1980s by Daewoo Precision Industries. The users of the USAS-12 are not known, but it is speculated to be in service with various southeast-Asian law-enforcement and military units.

"Gas-operated, South Korean, combat shotgun capable of fully automatic 12 gauge fire. Bulky, heavy and powerful, this massive rifle is banned for civilian use in the US. "

The USAS12 is a weapon featured in Battlefield: Bad Company and is obtained by completing a certain "Find-All-Five" challenge. One must simply check their stats online (see External Links) and it will be unlocked the next time the player signs in. Or you can enter the code aw3somef1rep0wer.

Only accessible through multiplayer, it is issued to the Demolition class. It is the only automatic shotgun, but it is balanced out by a lower rate of fire. It is capable of killing within 3 or so shots. Its main downsides come from its somewhat low magazine size (10 shells) and fairly uncontrollable recoil.

The USAS12 in Battlefield: Bad Company on the multiplayer map Ascension in Conquest mode.

The USAS12 being aimed.
Add a photo to this gallery

"The South Korean made USAS-12 is a gas-operated, magazine fed shotgun capable of either semiautomatic or fully automatic fire. Its bulk and weight are no deterrent when mission requirements ask for firepower and capacity."

The USAS-12 Auto is a weapon featured in Battlefield: Bad Company 2.

The USAS-12 Auto uses a 12-round magazine. It retains its fully-automatic fire mode, and is found as a collectible in Snowblind, but has several appearances throughout the singleplayer mode, such as when it is used by Russian forces in Sangre del Toro, and some elite units in Zero Dark Thirty and Force Multiplier, and given to the player character in Airborne. The USAS-12 with 12 Gauge Slugs can be found in an opened ship container just before some stairs at the beginning of the level Crack the Sky. Both versions of the gun are collectibles.

The USAS-12 Auto is the last shotgun issued to all kits, unlocked at rank 21. It is fully automatic and has a 6-round magazine. The USAS-12 has almost exactly the same weapon stats as the Saiga 20K except for it being automatic. With 12 Gauge Slugs, it can be used as a sort of burst-fire assault rifle, although it suffers from a small magazine, a low rate of fire, and high recoil, as well as a steep increase in spread per shot. It is a very good idea to apply the Extended Shotgun Magazine specialization to the USAS-12, as it doubles its capacity to a total of 12 shells per magazine and greatly increases its potential to take on multiple targets.

The USAS-12 Auto at Cold War in Squad Deathmatch.

The zoomed view of the USAS-12 Auto.

The USAS-12 Auto in first-person view.

The USAS-12 Auto in mid-reload.

The USAS-12 Auto in the single-player level Airborne. 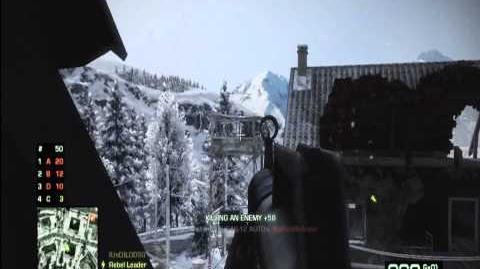 Three variants of the USAS-12 appear in Battlefield Play4Free.

It retains its fully-automatic firemode, but gains the ability to use iron sights. It comes with a standard 6-round magazine. It is not recommended you buy this gun permanently unless you have a great amount of funds, since most servers ban this shotgun.

The USAS-12 in Battlefield Play4Free.

The Veteran's USAS-12 features a higher damage over the standard USAS-12 and a larger magazine of 8 rounds. The cost for unlimited use is 1879

. The gun's appearance is rugged, but the differences with the standard USAS are very small, unlike other Veteran's guns. The gun now costs 750 credits after the Dec. 1st updates.

The Veteran's USAS-12 in Battlefield Play4Free.

Battlefield Play4Free game files
"The elite's variety of this weapon comes with even more firepower and larger mag size compared the veteran's version."

The Elite's USAS-12 does even more damage per pellet than the Veteran's version and has a larger magazine of 10 rounds to further increase its usefulness. The cost of this gun is 3749

per day. The weapon has a very clean appearance, like all of the elite weapons, and sports a tan paint scheme on the stock, pistol grip and handguard.

This gun is very similar to the Saiga-12, being equal or superior in almost every aspect: both have the same damage, but the USAS has a higher rate of fire, being fully automatic, but its magazine holds four less rounds, yet it costs less Battlefunds and can be temporary bought with in-game credits.

The Elite's USAS-12 in Battlefield Play4Free.

0.6
8.0
"A South Korean produced Automatic Shotgun, the USAS-12 was specifically developed for the combat Shotgun role. Feeding from a box magazine, and capable of both Automatic and Semi-Automatic fire, the USAS-12’s high weight makes recoil manageable. The open choke results in a wide pellet spread."

The USAS-12 is a weapon featured in Battlefield 3. The shotgun fires in semi-automatic mode and fully auto and has a rate of fire of 300 rounds per minute and fires at a lower rounds per minute if firing 12 Gauge Frag rounds. Firing rapidly produces heavy recoil for a shotgun. It has magazine size of six rounds or ten with Extended Magazine, plus one in the chamber if reloaded with rounds left over.

The USAS-12 is used by the private guards in the mission Kaffarov. It can be found on several enemies during the later part of the level. Extended Mags and Russian Optics are the most common attachments.

The USAS-12 can be found in the level Hit And Run. It's useful when clearing rooms and grouped enemies.

The USAS-12 is unlocked at Rank 43 as an all-kit weapon. The weapon is very effective in close quarters situations. Even though the USAS-12 has a generous magazine capacity, the automatic firing will deplete it quickly leading to frequent reloads. The USAS-12 is plagued with a long reload time despite the box feeding taking between 2.5 and 3.5 seconds depending on whether the weapon is emptied or not.

The USAS-12 fires the absolute lowest pellet count per shot, has the highest spread tied with MK3A1.

With any ammunition loaded, its effectiveness decreases much faster than any other shotgun outside of point blank range, as it needs at least 6 out of 7 pellets to connect with a torso in order to make a kill inside of 8 meters. which, coupled with the high spread, is highly optimistic at 8 meters and beyond. Note that with Flechette Ammunition a one-shot kill would require 8 pellets, meaning that a one-shot kill is not possible unless it is a point-blank headshot.

The MK3A1 on the contrary, has a higher magazine at 8 + 1 by default or 12 + 1 with Extended Magazines, as well as a slower reload, giving balance to the USAS-12's one less pellet per shot comparatively. However, the USAS-12 has a faster rate of fire and reload time compared the MK3A1.

With 12 Gauge Slugs or 12 Gauge Frags, the USAS-12 can be used at much further ranges as more of a high-power, semi-automatic rifle at the cost of losing its edge in close quarters. It requires at least two shots to kill, while it can take up to four at longer ranges. If equipping the USAS-12 with a 3.4x, 4x or 6x scope, it's highly recommended to switch to semi-auto as it can help increase the effective range of the weapon on maps with larger sight lines, but players using these scopes will need to account for bullet drop against targets at long ranges. It's also worth noting that slugs have a very slow travel time and have a small effective range.

At close range, optics are of much less concern as the USAS-12 with Buckshot or Flechette generally does not need to be aimed, although it will be more accurate if the player chooses to do so. A Laser Sight can improve its hip-fire accuracy greatly. A Flash Suppressor can help lower recoil for multiple shots at longer ranges with Slugs or Frags, or to decrease the player's firing signature in close range in darker areas when firing due to the flash from the weapon when firing being significantly reduced.

Extended Magazines is a highly recommended option for close quarters as it gives the USAS-12 four more rounds in the magazine and allows it to be able to fire more often and reload less often while still having the same ammunition count as without them applied. A Tactical Light can also help as close ranges to potentially blind targets, especially those with IRNV scopes, and to get the edge over them in close ranges if the player is assaulting a well defended area such as an objective in Rush.

The USAS-12 in the singleplayer level Kaffarov.

The USAS-12 Proficiency Dog Tag. Note that it shows a SPAS-12 instead of the USAS-12.
Add a photo to this gallery

The USAS-12 is a Shotgun featured in Battlefield 4.

The USAS-12 is an unlockable weapon obtained by completing the Gold assignment on South China Sea by scoring 10,000 points. It has a Prisma (3.4x) and Compensator attached, and fires 12G Slug rounds. It sports a Worm Woodland finish.

The USAS-12 can be found as a Battle Pickup weapon, equipped with 12 Gauge Frag rounds, a Holographic Sight, a Laser/Light Combo, and an Ergo Grip.

A variant with a FLIR sight, Angled Grip, and Laser/Light Combo, is also available, known as the USAS-12 FLIR.

Additionally the USAS-12 is semi-effective against unarmored light vehicles (Such as Jeeps and Quad Bikes) and Naval Craft (such as RHIB Boats and PWCs); while inflicting only minimal damage to the vehicles themselves, the splash damage of the Frag rounds deals effective damage to occupying Infantry and drivers.

Reloading the USAS-12.
Add a photo to this gallery

Retrieved from "https://battlefield.fandom.com/wiki/USAS-12?oldid=363059"
Community content is available under CC-BY-SA unless otherwise noted.