Ju-87 Stuka
Opel Blitz
Boat
"This is a story about grit, determination and second chances. You'll fight in the boots of Billy Bridger, a criminal pulled from a London jail for a chance of redemption alongside a Special Boat Section unit. What he lacks in experience he makes up for in perseverance."

Under No Flag is the second singleplayer War Story featured in Battlefield V. It is played through the eyes of Billy Bridger, a London-based criminal given a second chance and recruited into the Special Boat Service by George Mason. The pair, along with a unit of similarly roguish personalities, is tasked with destroying Luftwaffe air bases in North Africa, 500 miles behind enemy lines. Players have the choice of attacking key objectives with surgical strikes and getting out fast, or wreaking havoc by stealing enemy Stuka dive bombers and using them to take out the objectives.[1]

Along with Prologue, This chapter is available to play in the Play First Trial for EA and Origin Access Basic.[2]

In 1940, British Prime Minister Winston Churchill, after the evacuation at Dunkirk, issued an order to reinvent the fighting man, to "prepare hunter troops for a butcher-and-bolt reign of terror". These units would become the Special Air Service and the Special Boat Section, both formed from unorthodox units, not belonging to the ranks of conventional warfare, instead formed from criminals and misfits.

In London, notorious criminal Billy Bridger is arrested for armed robbery, arson, assault, and criminal use of explosives, placing him in solitary confinement. However, George Mason, an officer, offers him to a unit he is creating, the Special Boat Section, as it is in line with Bridger's persona. Initially, Bridger refuses, but asks what kind of unit it is. Mason asks him if likes the seaside in reply.

Later, a British warship deploys Bridger, Mason, and two soldiers behind enemy lines in a rainy Africa. On the way, they split in teams of two, and encounter their main objective, the Stuka aircraft. Bridger and Mason conduct reconnaissance in a nearby Luftwaffe airfield. The two then head to the airfield to destroy the aircraft with conventional bombs and Bridger's "safecracker specials", but the results become mixed: Mason's targets were destroyed, but Bridger's "special" did not explode as the Stuka begins taking off, dropping the bomb.

Destroying the aircraft was a success, but Mason was wounded, prompting an argument. A German encounters them, but they tie him and stuff him in a trunk of a Kübelwagen as they head for another airfield. However, Bridger needs to destroy Luftwaffe supplies and radar stations on his own and give Mason some first aid in a bunker.

Upon entering the bunker, Bridger finds some first aid, and attempts to radio the warship for immediate evacuation. He then immediately returns to Mason after destroying the supplies and radars.

While the destruction and first aid was successful, Mason encounters a huge amount of German armor and infantry, which was a result of radioing the boat. Upon escaping, Bridger regrets what he did and his uselessness, but Mason encourages him to keep fighting, as he is known for trying his best on robbing banks, and wants to bring that attitude to destroy the chasing Germans.

With no escape, Bridger and Mason begin to set up defenses and destroy German armor, infantry, and aircraft with all equipment at their disposal, even while singing "It's a Long Way to Tipperary", until the British warship answers to Bridger's response and attack all incoming German forces, rescuing the pair.

After the grueling defense, Bridger and Mason plan to attack Greece, stating the "summer is beautful at this time of the year", as well as German defenses ready to be destroyed.

The SBS would continue to fight in Greece, Italy, and mainland Europe until 1945. Churchill's "butcher and bolt" principle became well known to the world, and it became the standard of today's special forces units around the world.

In the epilogue, the German trapped in the Kubelwagen remained trapped indefinitely. 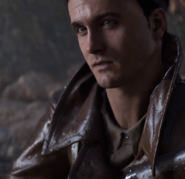 Retrieved from "https://battlefield.fandom.com/wiki/Under_No_Flag?oldid=372345"
Community content is available under CC-BY-SA unless otherwise noted.