Unsung Heroes is a Codex Entry featured in Battlefield 1. It is unlocked upon winning one game of War Pigeons. 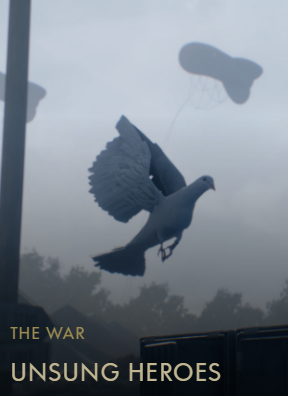 Over 100,000 pigeons served in the war, carrying messages between the front lines and command headquarters. Their ability to reach high altitudes with great speed combined with their natural homing instinct made them instrumental to the war effort. Communication lines could be broken, telephone lines cut or buried, and flag and light signals often proved inadequate. Pigeons, on the other hand, were hard to shoot down even for the best marksmen. They were also sent from inside planes or tanks and were vital for emergency communication, with a mission success rate of over 90%. They were so important that in Great Britain the shooting of a homing pigeon was punishable by 6 months in jail.

One famous pigeon was Cher Ami, a Blue Checked hen that was sent out by ambushed American soldiers, the "Lost Battalion". Trapped deep behind enemy lines, they were not only surrounded by enemy soldiers; their own artillery began firing on them. Without any working radios they sent out Cher Ami to carry a short message, "We are along the road parallel to 276.4. Our own artillery is dropping a barrage directly on us. For heaven's sake, stop it." The bird flew to divisional headquarters 25 miles to the rear in under 25 minutes. She arrived bleeding from the chest, with a broken leg, and blind in one eye, but the message was retrieved and the Lost Battalion was saved.

Retrieved from "https://battlefield.fandom.com/wiki/Unsung_Heroes_(Codex_Entry)?oldid=343318"
Community content is available under CC-BY-SA unless otherwise noted.