Uphill Struggles is a Codex Entry featured in Battlefield 1, introduced in the Turning Tides expansion. It is unlocked upon playing one round on each of the following maps; Monte Grappa, Cape Helles, and Achi Baba. 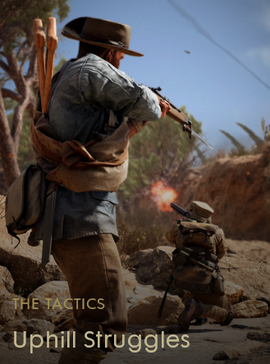 Modern weapons favored the defender to the point that a well placed machine gun detachment inside a pillbox, or an experienced rifle group behind solid cover could withstand far superior numbers of attackers. Even a single sniper could pin down a whole enemy company as it struggled over rough terrain. Advancing through the mud of Flanders, climbing the steep slopes of the Dolomites, or wading through the deep snow of the Carpathians slowed offensives down to a crawl and gave the outnumbered defenders the chance to concentrate defensive fire. At Gallipoli, the Allied landing forces had to wade through knee-high water while being under fire from entrenched machine guns and artillery batteries. Even though the Ottoman defenders were often just a few companies strong, the attackers could not force a breakthrough.

Retrieved from "https://battlefield.fandom.com/wiki/Uphill_Struggles_(Codex_Entry)?oldid=343374"
Community content is available under CC-BY-SA unless otherwise noted.