watch 04:21
Wiki Targeted (Games)
Do you like this video?
Play Sound

Not to be confused with the developer of Battlelog, Uprise

Fight your way back to extraction point:

HMMWV, V-22 Osprey, Technical, Star 1466, LAV-25 (destroyed)
"All units this net. Be advised a catastrophic earthquake event in Iran is affecting all operational capability in the Iran-Iraq region. This net will be delivering updates as they become available."

Uprising is the third mission in the singleplayer campaign of Battlefield 3. Henry Blackburn wakes up from the rubble of the earthquake, and retraces his steps back to the LZ for Extraction, while trying to keep out of sight from the PLR. The location is similar to the previous mission, Operation Swordbreaker, but was devastated by the earthquake.

Waking up from the earthquake[edit | edit source]

The mission begins with Blackburn regaining consciousness from underneath a large piece of destroyed road. In front of him, a wounded Marine cries for help, and is answered by Solomon and a PLR insurgent, who drags the soldier away, whilst the soldier continues to scream in pain at the movement. Pushing away chunks of rubble, Blackburn makes his way out of the natural hiding spot that he had been stuck in, and draws his knife.

After drawing his knife, Blackburn crawls along a tear in the tarmac, avoiding the torch beams of patrolling PLR soldiers, who are searching the area. During the crawl, a PLR tannoy plays repeating messages, claiming that the PLR would help wounded Americans, and that hiding was considered "an act of aggression". Crawling into a smashed drainage pipe, Blackburn is cut off by a rat, which proceeds to try and bite his finger as Blackburn tries to wave it away. Failing to wave it away, Blackburn stabs the rat on its head.

Exiting the pipe, Blackburn proceeds into a large building, silently opening the door. Spying a PLR insurgent, Black creeps up and stabs the unsuspecting guard, grabbing his AKS-74U afterwards. However, the rest of the PLR inside the building were also alerted to Black's presence, and a gunfight ensues in the corridor of the building. However, Blackburn wins the fight, and exits the building at the end of the corridor.

Arriving in the parking lot outside the hotel, a V-22 Osprey flies overhead, distracting a PLR squad and allowing Blackburn to move forward carefully, eliminating the squad at the same time. Blackburn then engages a PLR patrol in the parking lot, eliminating them and proceeding into the garage where Chaffin had been shot. However, more PLR insurgents have taken up defensive positions inside the building, and Black has to fight through them.

After clearing the garage, Blackburn is interrupted by a PLR patrol opening one of the garage's doors. Engaging the patrol, Blackburn pushes into a large street, where the way is blocked by a destroyed bus. Climbing into the bus, an RPG strikes the rear of the vehicle, tearing off the rear emergency exit, allowing Black to exit onto the street on the other side of the bus. However, as he does so, the PLR insurgents responsible for firing the RPG engage him, forcing Blackburn to fight through yet more insurgents, yet allowing him to push into the school.

Opening the gate, Blackburn enters the school, which was structurally intact despite the earthquake. Advancing through the corridors, Blackburn kicks open a locked door, and enters a corridor leading to an open exit. However, as he approaches it, Montes appears in the doorway, shouting, "Freeze motherfucker - hands!" However, he then realizes that it was Blackburn, and the pair move down a battered alleyway towards the extraction point. Here, Montes mentions he doesn't know the way back, as all the buildings and landmarks he knew had collapsed.

Moving back towards the extraction point, gunfire rings out, prompting Montes and Blackburn to dive for cover behind a HMMWV. Blackburn is told to man the .50 cal on the Humvee, and enters through the driver's door. Beating back numerous PLR insurgents and Technicals, Blackburn holds out until a V-22 circles over the area, but is unable to land. An RPG strikes the Humvee, destroying the vehicle and throwing Black clear of the wreckage. The V-22 flies in to pick the Marines up, and Blackburn sprints towards the ramp, where Montes helps him on board.

As the V-22 flies away, the arches to the rear of the helicopter start to crumble and collapse as an RPG hits the structure, ending the mission. 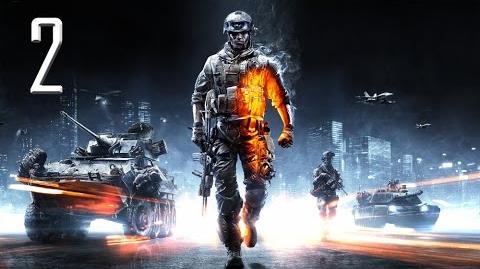 Battlefield 3 Walkthrough - Uprising
Add a photo to this gallery

Retrieved from "https://battlefield.fandom.com/wiki/Uprising?oldid=382035"
Community content is available under CC-BY-SA unless otherwise noted.