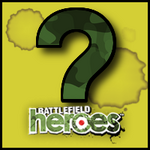 I'm playing BF:H since start of Open Beta. I was looking for a official wiki on the website, but now this wiki became a more than good alternative. It's a try to classify all content which is mostly hard to find in the official forums.

If you are encouraged in editing and want to get more rights, feel free to drop an application on my Talk Page. Please create a wikia account first!

Remember that you won't recieve adminship just for fun, you can cause much harm with those rights and require an advanced editing skill and good human sense. Admin rights don't give you any advantage in editing, it's more a task of maintance to keep the wiki clean and change very basic wiki structures.

You should meet the at least 3 of the following requirements to get considered:

In constant efforts to improve the game, many players including myself came up with more n' less usefull suggestions, here's the list:

Those are the suggestions I hopefully had a finger in the pie:

When the german client was released on the PTE, small feedback found approval and some of the worst translations were improved. Seaside Skirmish was renamed from Küstengefecht to Strandscharmützel. Still enough nonsense left *.*

As a result of the german client I cleaned up the german strings and gave others a chance to play the game in their very own style and language, called the Community Language Project. Summer 2011 more languages were added, but this could have been planned anyway.

More than a year ago I sent a mail to Ben Cousins, suggesting him a more constant website update. I complained about the big gaps between major game updates and came up with the idea of the selling single items with a small discount each day. Now it's well known as DoTD and pleases both players and EAsy.

Well, I crused around the PTE when the Winter Weapons were tested. I've been quite disappointed that they were massivly unbalanced and boring (Medal of Honor Weapons reskins). Hate on me, I told this HATE. Had a couple of downsides, too:
a) They missed to change the rifle to MR >.>
b) The game files are still messed up with naming
c) The zoom deviation wasn't changed, so the spread for MR weapons is even worse on zoom.
d) MR versions are generally underpowered because they represent the default weapons; in fact nobody trusts on them.
e) All in all the revenue from scoped weapons was a huge disappointment :O
→ Please balance MR weapons and fix the zoom deviation!

Of course I made a couple of other suggestions, those turned out to be rubbish only some weeks or months later....

Retrieved from "https://battlefield.fandom.com/wiki/User:BFH-Wiki?oldid=371104"
Community content is available under CC-BY-SA unless otherwise noted.