Just 8 more days before the end of October, and DICE has announced a new dog tag challenge.

(Yes, it's a dog tag challenge but oh well.)

The challenge is called "Air Kills Dog Tag Challenge". Basically, the PC, PlayStation 3 and Xbox 360 communities in Battlefield 3 compete against each other to reach 2,000,000 (2 million) kills with Air Vehicles. That's regardless of game mode (maybe not Squad Rush or Gun Master) and map (except the Battlefield 3: Close Quarters maps).

Air Vehicles in Battlefield 3 include:

The prize is this dogtag, which is called the "Death Dealer" (pictured below). 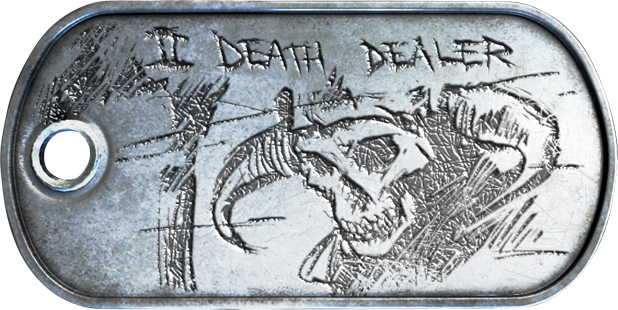 Everyone gets a chance to win the dog tag, but each and every community must (and I mean must) obtain 2,000,000 Air Vehicle kills to be able to use it. Doesn't matter if you're first, second or third, you still need to get to the required 2,000,000 kills.

If you're participating in the Battlefield Premium exclusive competition to get the most Air Vehicle kills in the expansion pack Battlefield 3: Armored Kill, then the kills WILL count towards the dog tag challenge.

Are you participating in this challenge or do you think that all of this worthless?

As my nameless friend from Going Hunting once told me:

"Have good ends, good highs, good lows, no out lights. Ready in the back? Here we go."

The counting has already started since October 27 and DICE has released an update on how many Air Vehicle kills each platform's Battlefield 3 community has.

On the page showing those counts (second source down below), some people have expressed this challenge as being in favor towards the PC players, since they have more Air Vehicles in the bigger 64-Player maps in Battlefield 3.

One commenter named "Tylund64" had a comment on Page 12 saying:

"funny how PC players are super happy about this when they have more aircraft in the air in most maps than console. and there are more players to kill"

Another commenter, "GrEyMaTaSpLaTa", also had a comment on Page 12 saying:

"PC Will Win. This Challenge is Unfair Due To The Amount Of Players In The Round. PC Has More Players in a Round, Therefore They Will Get More Air Kills Than Consoles."

Do any of you find it unfair that PC players will win because they have more players and Air Vehicles or do you not really care at all?

So in just a week after the counting has started, the PC Battlefield 3 community has unlocked the dog tag before the PlayStation 3 and Xbox 360 communities.

That means the PC players have reached 2,000,000 Air Vehicle kills first. What about the console players you ask?

But out of the blue, a technical glitch has happened with the counters for the console Air Vehicle kills. This means that the counters have stopped counting and DICE has decided to give both the PlayStation 3 and Xbox 360 players dog tag as well without reaching 2,000,000 Air Vehicle kills. If you can't take my word for it, here's a quote from the news post itself:

"Keeping with tradition, we just ran into a technical snag. The net result is; we will hand out the dog tag to players on all platforms during the evening. It was either that, or hold something back from the PC players which they had justly earned."

Yes so the result will just be like the Wake Island Dog Tag Challenge. Everyone gets the dog tag at the same time.

So are you disappointed at the fact that the challenge had an anti-climatic ending?

Retrieved from "https://battlefield.fandom.com/wiki/User_blog:3RDRANGER/New_Dog_Tag_Challenge_Coming_Up?oldid=258107"
Community content is available under CC-BY-SA unless otherwise noted.