Hello Battlefield Wiki! This is 3RDRANGER bringing you some later-than-new news about the upcoming game in the Battlefield series, Battlefield 1.

The game is due to come out officially on October 21, 2016 (not counting the early access from EA Access, Origin Access, or the pre-order bonus). However, EA and DICE are hosting one last event for the game's pre-release marketing period in order to show off more of the game's singleplayer and multiplayer components.

Titled the "Road to Battlefield 1", the game will be livestreamed on the official Battlefield Twitch channel. Things from the game that will be shown off include a playthrough of the game's second chapter of the singleplayer campaign, Through Mud and Blood, a 64-player match on the map Amiens, and gameplay of the Operations game mode.

The event starts on Wednesday, October 12 and ends on Friday, October 21, 2016. Livestreams will occur from 1 PM to 3 PM Pacific Time everyday between the 12th and the 21st. Below is an image of the schedule for the event: 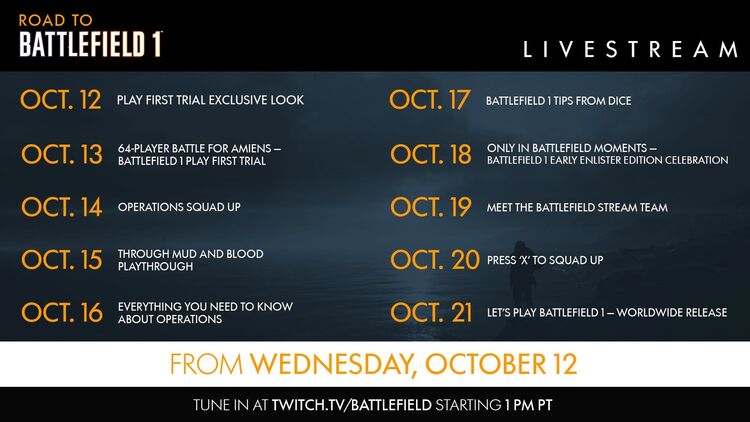 Well, I'm excited to see more of the game before it comes out. Are you? Comment below. Other than that, I hope you have a nice day and prepare for all-out battle!

Retrieved from "https://battlefield.fandom.com/wiki/User_blog:3RDRANGER/Road_to_Battlefield_1_-_Livestream_Event_Hosted_by_DICE_and_EA,_Running_From_October_12_Until_October_21?oldid=303111"
Community content is available under CC-BY-SA unless otherwise noted.