Shorty after the EA Press Conference today, I got hands on with Battlefield Hardline. Following EA's announcement that the game was available at the press conference, I rushed over to the monitors and happily awaited to get into the action.

As soon as I got into the game, I was right in the action. We were playing Blood Money on High Tension and I was a Thief. The purpose the gamemode is to go to the other teams "Vault" ,which is an armored car full of money, and steel their money. Once stolen you must take the money back to your vault. In more simpler terms, its a new version of Capture The Flag

As a long time Engineer player, it was obvious for me to pick the Mechanic class with the UMP-45 and TEC-9. I did notice how weapons and attachments, etc. are obtained through money gained from XP in a manner similar to Counter Strike. I also noticed straight away the change in controls such as switching front and back bumpers for shooting. After figuring it out however, i went on the Battlefield!

I noticed straight away how beautiful the game looked and how expansive the map is for being urban. After a bit, I noticed an abounded Lenco B.E.A.R. and hopped in. Surprisingly the driving controls are changed from Battlefield 4 back to the Battlefield 3 scheme. I proceeded to wreck havoc on the other players. The vehicle drove good and had a default explosive cannon and LMG despite having a low turning speed. One part I found entertaining was when I saw an enemy cop come behind my vehicle thinking I was a friendly, as my I was in a cop car, only to be met with the back of my vehicle as I backed up.

After being damaged and successfully dispatching players, I noticed a new feature in the lower right stating "Hold R1 for Perk". Curious I do so and two Specializations popped up and I had the choice to pick on which was FAST REPAIR. Afterwards I continued my rampage until I got stuck on the overpass and was forced to bail. 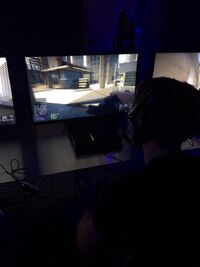 Playing as infantry now I proceeded to play the objective and took money from the enemy vault. During play, an enemy got close to me and I proceeded to knife him only to realize I was unable and got killed. As such I spawned in the Scout Helicopter.

Like the BEAR, the Scout had the same exact controls as Battlefield 3 so I had no trouble flying. I then went and killed as many enemies as I could see without trouble as I have guys in real life standing behind me telling me Im an awesome pilot. It was at this point, however, that we lost the match. Quite frankly though, I was satisfied.

I ended my first ever match in Hardline with a 27/6 KD and was feeling pretty good about myself. Cant wait to see whats in store tomarrow.

Today however, watch for Player 27 as that was the username I was playing as so you just might see me! -- awyman13