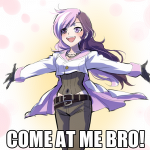 How do you two know each other? Йура

Sorry for late response. I thought it was Yuri

I'll have you a sig my tomorrow. k

I'm late on your request for a sig (if your still editing). But I remembered my old friend.

use .{Template:Signatures/Angel of Anarchy}} (replace the period nearin your prefrence and switch on Custom Sig.

I kept forgeting until I decided to archive my user talk. Found you and I was like "oh crap". Then I made you one.--

That happened to me once except that we got knifed.--

Try flying through 3 skyscrapers and have the 2 jets behind you crash into them on Oman.

I didn't know about that page. I'll undo my edit. Stop drinking the haterade and start drinking the bubble tea!

I saw you uploaded File:Azusa.jpg but you didn't license it completley. As you placed it was uploaded with permission, you still got to finish the licensing with {{Permit}} and place there the Terms of Permission that you were allowed to upload the image. Thanks - Pedro9basket (talk) [

Not exactly; you got to add the template from the link of the page (which is placed above this statement) and write up the Terms of Permission to have that file uploaded. If in the other hand it's in Public Domain, just show me the link and I'll take care of the rest. Pedro9basket (talk) [

I don't think you're getting my point; you need to write in by which conditions were you allowed to upload the picture here. If it was that simple, I'd have done it myself. Pedro9basket (talk) [

Saying that there is no conditions is like stating it's unlicensed, therefor I'd have to delete it. In another way, tell me: where did you get the picture from? From an anime, it looks like? Then give me
the anime's name and/or its publisher to place it under Fair Use. Pedro9basket (talk) [

Alright, it's all I need! I just finished up the licensing of it. Use {{Fair|Source|Copyright Owner}} for the licensing like those (just replace the "Source" and "Copyright Owner" with the proper lol). Anything wrong I'll call it to your attention. The image is now free to be here, thanks ;) Pedro9basket (talk) [

No problem. Anything, just call in :) Pedro9basket (talk) [

For bringing to my attention that vandal, he's been blocked. Formally, we use Template:Warning when we should warn according to BF:BLOCK. - Pedro9basket (talk) [

So sorry for the late response, been a little bit distracted!

If you want to upload images, you may need to know where they come from, and how did you get access to them. Any image hosted here without knowing the proper source will be deleted ;)

Hope I helped out! Any questions, spell them. - Pedro9basket (talk) [

The problem we discussed tonight (last night if you get this tomorrow) has been made into a forum by yours truly. Don't forget to leave your say. Forum:Chat_Moderator_issue. -Redskin-26

Yeah, this is pretty self explanatory.

You're a Trusted User now. Enjoy.

Who are you again? :P

I have a good idea of who you are referring. Should you mark yourself as active again in the user flag page and template? SPREAD ANARCHY! -- awyman13

Maybe you can help Arrow out with this overhaul, detailed here -- awyman13

Since I never saw you on steamEdit

Retrieved from "https://battlefield.fandom.com/wiki/User_talk:Angel_of_Anarchy?oldid=255166"
Community content is available under CC-BY-SA unless otherwise noted.