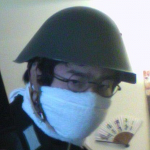 -Fortune Arterial (it's a mushy romance-themed harem story with vampires)

-The Mystic Archives of Dantalian (A really nice one, it's where my avatar comes from, but it got cut short because of IRL stuff iirc)

Why do you ask, if I might ask? Юра

Inu X Boku seems fairly lighthearted from what little I've watched. It starts out sounding kind of somber because of the main character's monologue, but really doesn't strike me as being nearly as serious as say, Higurashi.

And, DEathgod's avatar is from this show which is apparently a comedy. I might check it out, since now I'm curious about why DG's avatar is this.

Honestly KMB was probably the last genuine comedy I've watched in some time, though. Юра

Why did you undo my edit to the SV98 page about BF4? Someone put it in the BF4 weapons box so shouldn't there be a section like I had on it?

The picture is one I got from the livestream of E3.

It appears I haven't logged in but this is Ramp

However I'm not going to fight over this.

The i dont think the page you created, the KFB, is an actual weapon. I looked up the company you said made it and they never made a weapon of that name, no one has. However, the company you did say made it did make a weapon called the RFB which so happens to also be a semi-automatic sniper rifle like the 'KFB' is. I think you got your info messed up -- awyman13 {Talk} {Work} 05:03, June 16, 2013 (UTC)

Hi there. I was recently archiving some forum posts and discovered that your signature interferes with the archive template. I have made a very minor change to Template:Signatures/DiCePWNeD in order to fix this. It should still look the same. Hope you don't mind - Bondpedia (Contact) [

Retrieved from "https://battlefield.fandom.com/wiki/User_talk:DiCePWNeD?oldid=257377"
Community content is available under CC-BY-SA unless otherwise noted.