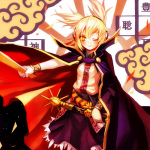 Ive been away from the Wikia for a awhile but i noticed your an admin now! Thats AWESOME! Least you got recognition for all your hard work. No one has even noticed what ive done, not even an award ;(. Anyway Congrats! awyman13 {Talk} {Work} 03:03, April 26, 2013 (UTC)

No problem, I will get Sabalan Pipeline tommorow.  I am licensing the images now.

Update: All the images have been removed of their 'white spots'.   Not PSKwhirled ~ No more Hugs :3

Ive Got a Problem Edit

Thank you, my friend!

Up for BF3 Today? Edit

Thanks for implementing my Featured Article nomination.

Perhaps do you want to play BF3 with me and 3RD?

As a partner in our joint venture, Kazimir Slavsky now has rights to use Cattlelog™ name without the need of a Fair Use template.   Not PSKwhirled ~ No more Hugs :3

Thanks to your recent favorite character change, I will present you with an archaic portrait of Toyosatomimi no Miko.  Now, get your happyface ready.

On to the question, do you think that these sort of pages should exist? I mean if these type of pages exist, we would have to create articles on everything from a watchtower to a concrete wall, it seems redundant.

This guy - http://battlefield.wikia.com/wiki/Special:Contributions/75.73.32.237 - has been adding wrong categories OVER AND OVER AND OVER again to the Maps of BF3 category page for everyday for over a week. I think it may be time to block him as he has not gotten the message after all the reverts you've made to his edits. -- awyman13 {Talk} {Work} 02:13, June 14, 2013 (UTC)

Oh god now i gotta go through them again. Maybe you can delete Super Six Five in the meantime. Its a character article about a vehicle! Infos really just trivial -- awyman13 {Talk} {Work} 07:48, June 23, 2013 (UTC)

BC1 & BC2 Multiplayer pages Edit

Hey PSK, someone decided to delete the entire Rush page's content earlier. Just bringing this to your attention to see if appropriate action should be taken. Thank you, sir!

I think that warning should suffice. If he blanks another article then action should be taken.

Many BF3 Specializations have a For the Battlefield: Bad Company 2 Version, See.... at the top of their pages. Shouldnt we combine these pages? Just because they dont have the same names doesnt mean their not the same (as with maps, weapons, etc). If its that big then possibly a forum can be made, up to you man. -- awyman13 {Talk} {Work} 21:18, July 1, 2013 (UTC)

Well then maybe we should remove/modify the See templates because thats just redundant to have that. We wouldnt have to combine all Specializations but ones like Explosives would fit. -- awyman13 {Talk} {Work} 22:19, July 1, 2013 (UTC)

Awyman here suggested to me that the Bad Company and Bad Company 2 multiplayer pages needed to be removed due to how redundant the information is presented considering that the game modes and kits already have their own pages.

I just wanted to check it over with you and some other admins to make sure that it is fine.

I don't think this is something that needs discussing. Юра

Squad Deathmatch and Squad Rush have their own pages yet no other gametype variations have their own. Shouldnt we just remerge with the main gametypes? They already have their own little sections on the main pages but their just redirects. I mean its not like Conquest Assault has its own page. You good with it? Idt its that big where you'd have to ask others. Just let me know and give the go, thks.

Hello, I found information about BF4 but i don't know what to think of it. It is about speculation or about real information?

I'm new and and I do not know what to do.

This informations are present on several different site and look like datafiles of the game.

Are they rather important and good to be integrated into the wiki as article?

Up for some BF3? Edit

Well? I havent gotten to show you my skills in a while. Too bad you dont have a mic though. --

Hey! We rocked ass today in the beta, did we not? Too bad I lagged out in our last match together today otherwise the team would have felt the Wiki wrath! BTW, i also created a forum recently and your input would help out as it pertains to a HUGE merging.

Is this Anon who blanked Rangers page Ranger himself? If not... BAN HAMMER! --

You can delete the assignment pages for BF3 now except for the Premium Ones. Speaking of which, think you could help me with that? It took 3 hours just to enter the 45 other assignments and the 35 Prem and 45 BF4 Assignments still need to be added.

Just wanted to check in with you and some of the other BF admins and see if you guys needed any help with the Wiki before the BF4 launch. It seems you have it under control, but we just like to check in and make sure you guys have everything you need before a new title launch. Help with organization, new templates, and custom art are all things we're more than happy to help with.

That said, do you guys have any plans for the BF4 launch outside of getting all the new content up? If not, we'd be happy to organzine some polls, community awards or simple videos.

Anyways, please don't hesitate to reach out if you need anything, and thanks for all your work on the BF Wiki!

Both Joe and Ranger have today announced to me their intention to retire from the wiki. That leaves the wiki without an active bureaucrat (I can't stay myself, my dissertation is on the horizon). One of either you, PLR or Awyman needs to fill the gap. I suggest you read the guidelines at BF:ADMIN and BF:RFA then consider your future. - Bondpedia (Contact) [

It would appear that Slopijoe promoted you to a b'crat some time ago? Not sure if you're aware, but he had no right to do that. All b'crats require a community vote to be promoted. If you wish to retain b'crat rights, feel free to have yourself ratified at BF:RFA. If not, you will be stripped back to an admin.
I am very sorry that this situation has occured. I honestly have nothing personal against you and very much hope you decide to run to retain your position to save us both from this tricky situation... - Bondpedia (Contact) [

Having thought about it and discussed it with Yuri and others, I want to ensure that this situation is resolved as quickly and reasonably as possible. I intend to nominate you myself at BF:RFA, to avoid having to strip you of your rights, which just seems unfair on you since this situation wasn't your fault. All you have to do is accept and we can go from there. Judging by the response to the situation, you will win the vote... - Bondpedia (Contact) [

Hey PSK, glad to see you've resumed your regular edits. Good to have you "back". :)

Sorry guys, Yuri has reminded me that it there is an unwritten convention that users don't vote for themselves. Unfortunately, this was somewhat unclear but the votes will be removed and the rules clarified. Either way, you can still vote for your fellow nominees, even if you can't vote for yourselves. - Bondpedia (Contact) [

Congratulations, you're request to be a bureaucrat has been successful! Your previous upgrading will be allowed to stand and your name highlight updated accordingly. As Spiderman's Uncle Ben once wisely said: with great power comes great responsibility - use it wisely. - Bondpedia (Contact) [

Ah **** I forgot! Happy Late Birthday! 17 right? Wouldve told you this last Wednesday but Ive been busy with School and moving. Again Happy B-Day my friend! Take some cake. -- awyman13

Print screen sadly ads a bunch of slack lines (and reduces quality). The steam overlay is also a no go. Once it gets to a certain point, I will quit the game and rejoin. Hopefully somebody with experience in photo-editing software could aid me in getting a transparent background.

EDIT: ERMEHGAWD I AM LATE, NOOO! Anyways, the next set of images will be hud-free.   Not PSKwhirled ~ No more Hugs :3

Even better, could it be "Speshite! (Спешите!)", meaning "Hurry!" as an interjection? It would fit the context of that sentence perfectly.

Well, the context was "[Word], children! Unless you all want to die here, we go now! Grab your guns!"

They failed us PSK. Our good for nothing team FAILED US! -- awyman13

So, the French Wiki has been created by User:SSDGFCTCT9, the July 22, 2011 but he left soon after. And I took it over last month, searching for "Wiki Battlefield" on Google, finding your Wiki and the French flag !
As you can see, the French Wiki looks very much like your Wiki. I hope it is not an offence for you and your Battlefield Wiki community.

Currently, I'm only creating base pages, with few infos I know and can write or get in a short time, in order to get, at least 100 pages. And I'm working on "Battlefield 2", the game I'm still playing (BF3 is sleeping on my hard disk !). But I want you to know that we (I and future contributors !) won't do words translation of your pages. We'll write our own French infos.

But the reason why I'm writing to you is to ask for your permission to use all your Wiki media stuff (images and videos) and also, all the videos on your Youtube channel.
And, if it's nececssary, I give all of you my permission to use anything on the French Wiki you could be interested in (including CSS, ....). Just press "Edit" or "View source code" or ask me for more !

I wish the French Wiki could have a real restart (I need contributors !) and we can build friendly links.

I fixed your signature. It had a stray bold tag causing my entire talk page to go bold. :p

I will get all the BF2 weapon sounds from this Youtube video. I already have the Beretta 92FS (with and without silencer) as .ogg format. Could you save and upload them on your official Youtube channel to complete your collection ? Next time, I'll probably send  a zip file with all the sounds to you. --

Hello, PSKwhirled. I'm an administrator over on the Titanfall Wiki, and I was brought to the topic of our wikis affilating by Awyman13, and I think it's a great idea and can benefit us greatly. It would be greatly appreciated, and thanks! NinjaFatGuy (talk) 02:10, March 15, 2014 (UTC)

PSK remember you can upload multiple photos at once (20 at once) through the admin dashboard. -- awyman13

Since chat a shit. Юра

If steam's stuck, just end the process and start it again. Юра

Chat crashed for me Edit

My name is Jorge and I am from Wikia's Community Development team. I just wanted to let you know here on your talk page that I sent you an email (at the one you registered with Wikia) about a potentially cool upcoming Battlefield opportunity. If you haven't had a chance to check your email and let me know if you're interested, please do. I'd love to hear your thoughts.

Can you ID the new Scout Helicopter from the Robbery expansion for BFHL? -- awyman13

Retrieved from "https://battlefield.fandom.com/wiki/User_talk:PSKwhirled?oldid=287931"
Community content is available under CC-BY-SA unless otherwise noted.