The VADS makes a short appearance in singleplayer on Ghost Town, as Marlowe attempts to reach it to shoot down the Legionnaire's Ka-52. However, it is destroyed as soon as the player nears it. It is never available to the player.

It is also seen in the Battlefield: Bad Company Early Gameplay Footage Trailer for a short while.

The VADS in Ghost Town before it got destroyed.

The VADS being fired in the Battlefield: Bad Company Early Gameplay Footage Trailer.

"US made short-range 20mm rapid-fire Gatling gun employed as an anti-aircraft weapon that fires explosive 20mm rounds. It is sometimes used as a ground support weapon to engage soft-skinned armored vehicles. Although removed from service it still operates in foreign armies."

Only available in Battlefield Bad Company 2's multiplayer, the VADS is included in in the maps of VIP Map Pack 4. The VADS' Gatling Gun is very effective at taking out enemy Helicopters and Light Vehicles, as its very high rate of fire makes up for the lack of damage per shot. As the VADS' aiming system is on a TV, it gives the player the impression that he/she is protected from enemy fire by armor. However, the player is exposed to enemy fire while operating the weapon. It is also very effective at killing infantry, much like the minigun on the UH-60 Black Hawk. Because it's so effective at destroying helicopters and often placed where the opposing team has a hard time taking it out/capturing it, it is considered by some as an overpowered emplacement. One way to counter the VADS when piloting aircraft is to utilize any cover available and to stay at an extremely low elevation.

The VADS as it appears on Port Valdez in Conquest mode 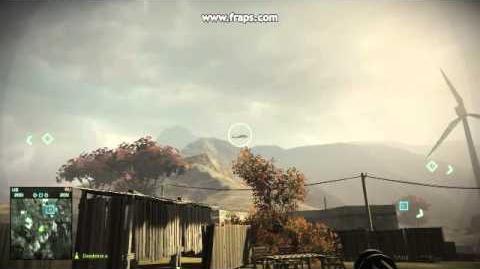