The RDA-1 (Russian: РДА-1; Разведывательно-дозорный автомобиль; "reconnaissance-patrol car") is a Russian lightweight transport vehicle used by the VDV, the Russian Airborne Troops. The vehicle was made from scratch by Lieutenant Colonel Anatoly Lebed for the 45th Guards Independent Reconnaissance Brigade, based on a Lada Niva. Only one example of the vehicle was produced, which took Lebed roughly a year to make. It was first shown at a military exercise in the Pskov Oblast in March 2010. The vehicle is mounted with a NSVT heavy machine gun.[1]

The RDA-1 appeared in the Battlefield series under the name VDV Buggy.

The VDV Buggy is a vehicle featured in Battlefield 3.

The VDV Buggy is the Russian Army's light armored fast transport vehicle. It is seen in Rock and a Hard Place, where Russian paratroopers use them as mobile gun platforms in an effort to fend off Blackburn's squad and the U.S. Marine attack force. They can be destroyed, but cannot be driven by the player.

In multiplayer, the VDV Buggy appears as the Russian equivalent to the American M1161 Growler ITV. Like the former, it has space for three players. A driver who controls the vehicle, a gunner who operates the rear mounted KORD machine gun, and an extra passenger who sits next to the driver and can use whatever weapons they have with them as they sit in the vehicle. The VDV Buggy is resistant to gunfire, but the crew are largely exposed due to the lack of a windshield and doors, having speed and mobility over armor and protection. The vehicle can be easily destroyed by anti-tank weapons and explosives.

The third-person view of the VDV Buggy. 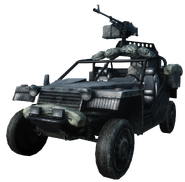 A render of the VDV Buggy.

Side render of the VDV Buggy.

A VDV Buggy crashes through a fence in the map Armored Shield.

The VDV Buggy returns in Battlefield 4 as a light vehicle in use by the Russians.

It is first used by Russian troops in Baku. Recker can commandeer one after killing its occupants, but must do so before hostile soldiers occupy the machinegun. It is again used by Recker in Singapore when he finds one for his squad to get to their extraction point much faster.

The VDV Buggy is the Russian counterpart to the Chinese LYT2021 and the American M1161 ITV. It can be found at RGF deployments, as well as flags controlled by the RGF. The VDV Buggy is resistant to small arms fire, but the crew are largely exposed due to the lack of a windshield and doors -- also, the vehicle itself is vulnerable to anti-tank weaponry and explosives. If the vehicle drives into a static object at sufficient speed, it can catch fire and suffer significant damage.

The vehicle has space for three players: a driver who controls the vehicle, a gunner who operates the rear mounted KORD machine gun, and a passenger who can use his primary weapon and equipment.

VDV Buggy on the loadout screen

The VDV Buggy in a parked position.

The VDV Buggy from Recker's view as he is driving.

The VDV Buggy seen in the Official Singleplayer Story Trailer.

The VDV Buggy appears in the singleplayer campaign of Battlefield Hardline in the episode Sovereign Land. Under assault from Tony Alperts forces, Nick Mendoza and Marcus Boone take cover in an abandoned gas station as numerous VDV Buggies circle them and take fire. They are, however, successful in fending them off and proceed to drive a VDV Buggy to the nearby airfield in order to steal the Brute and escape.

The VDV Buggy is a vehicle featured in Battlefield 2042. Available exclusively in the Battlefield Portal, it functions in the same manner as it's Battlefield 3 counterpart.