The VSS (Russian: Винтовка Снайперская Специальная Vintovka Snayperskaya Spetsialnaya; English: Special Sniper Rifle) is a Soviet-made suppressed designated marksman rifle (DMR) based on the AS Val assault rifle developed in the late 1980s by TsNIITochMash. It fires the same special-purpose 9x39mm subsonic ammunition as the 9A-91.

Battlefield: Bad Company Official Prima Guide
"A lightweight, short and quiet sniper rifle using subsonic ammunition. It features a built-in sound suppressor, a wide array of scopes and can be easily broken into 3 parts to allow discrete transportation. Despite its size, it fires a heavy round which can penetrate a wide range of armour."

The VSS is a weapon featured in Battlefield: Bad Company.

The VSS can be found in the mission Par for the Course as a collectable. Right before the player crosses the bridge to Serdar's palace, it should be on a crate to the right. It can also be found in level Ghost Town in one of the buildings when the area is being shelled by American artillery.

The VSS is issued to the Recon as an unlockable, obtained by either reaching rank 25 or purchasing the Gold Edition. It has a higher rate of fire than any other sniper rifle in the game, and is in fact fully automatic, albeit the slowest-firing weapon of that type. Its lower damage and lower long-range accuracy balance its high rate of fire (for a sniper rifle). It can normally kill in 3-4 body shots and has an integral silencer.

The VSS in Battlefield: Bad Company on the multiplayer level Harvest Day.

"The VSS is compact silenced and chambered for subsonic 9x39 mm round. The round differs from standard 9 mm in that it delivers more energy and penetrating capability up to a range of 400 meters."

The VSS Snaiperskaya Special is a sniper rifle featured in Battlefield: Bad Company 2, issued to the Recon kit, requiring 26,000 points to unlock. While the VSS is equipped with a 6x scope by default, it can also be equipped with a Red Dot Sight, 4X Rifle Scope, or 12X Zoom Scope and is also compatible with the Spotting Scope specialization. Unlike any other sniper rifles, the VSS requires a maximum of 3 shots to the head in order to kill at long range. The VSS consumes ammunition rapidly but also possesses the highest in-game damage output per second, making it similar to a high damaging submachine gun when equipped with a short range optic.

Despite being fully automatic and having low recoil, the bullets do not behave like those of an SMG or assault rifle as they suffer from massive spray penalties, limiting the effectiveness of automatic fire beyond close range. As with almost all automatic weapons in the game, firing in single shots or in bursts allows for greater accuracy and even allows for marksman headshots at range.

Being a suppressed sniper rifle, the VSS fires a subsonic round (which has no in-game effect on speed or drop), there will be no muzzle flash, the bullet will not make the characteristic cracking sound of a usual sniper bullet when passing by a player and enemies cannot scream a sniper warning until they are hit. The VSS has a greatly reduced chance of being detected and can potentially delay the enemy's reaction time. The VSS' silencer allows the sniper to fire a few shots to gauge distance by observing the impacts of the bullets without the target noticing, this is best done when the target is distracted.

In Hardcore mode, it is the only automatic weapon capable of killing an opponent (without Ceramic Body Armor) in only one headshot at close range when using Magnum Ammo. 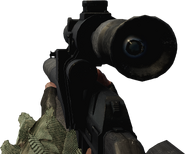 The view through the VSS Snaiperskaya's scope. 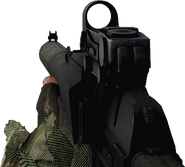 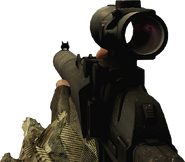 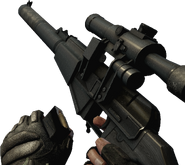 The furthest an enemy can be for the VSS to do its highest damage at 18m.

The closest that an enemy can be for the VSS to do its lowest damage at 64m.

The VSS Vintorez is a compact sniper rifle with almost SMG-like characteristics. Its intended use is for Spetsnaz units on clandestine operations and comes with a permanently attached silencer. The VSS is primarily used for shorter ranged sniping.

┴
"The last iteration of the classic Russian rifle features dual fire modes and a powerful integrated suppressor, making it the perfect weapon for clandestine operations."

The BSV-M is a weapon featured in Battlefield 2042, Added in Zero Hour season. Player can unlock the weapon by reaching tier 17 in Battle Pass. By default it comes with 5x scope and Subsonic ammunition.

The BSV-M functions as an aggressive DMR in comparison to its contemporaries due to it being the only weapon in its class with an optional automatic fire. Additionally, due to its integrated suppressor, The BSV-M does not work well at range against moving targets, nor does it accept muzzle attachments outside Long and Short suppressor, Both options work the same way as the Extended Barrel and Shortened Barrel.

Player can change the ammunition type to Close Combat to increase rate of fire for advantage on close quarters combat.