Vein of the Empire is a Codex Entry featured in Battlefield 1. It is unlocked for winning any gamemode on Suez. 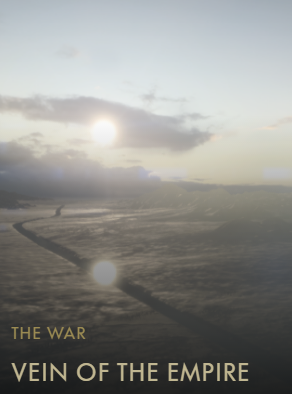 The importance of the Suez Canal to the British in the war cannot be overstated. Having millions of troops from India, Australia, and New Zealand heading to Egypt and Europe, and also British oil from Persia being shipped through the canal, it was a vital supply line. If captured by the Ottoman Empire, it would severely disrupt British troop and supply routes and put the entire Eastern Mediterranean in Ottoman hands.

In early 1915 they cross the Sinai Desert to attack the canal. This near impossible accomplishment was enabled by German engineers going in advance to dig water wells through the desert. When the Ottomans reached the canal they knew they had only four days to seize it before running out of supplies.

Ottoman artillery would be vital for the attack to have any chance of success, and diversionary attacks all along the canal would be launched in the hopes of confusing the defenders. The Ottomans would attack the Suez Canal several times during the war, but never took it. The British counter-attacked and pushed the Ottomans back into the Sinai Desert.

Retrieved from "https://battlefield.fandom.com/wiki/Vein_of_the_Empire_(Codex_Entry)?oldid=343328"
Community content is available under CC-BY-SA unless otherwise noted.