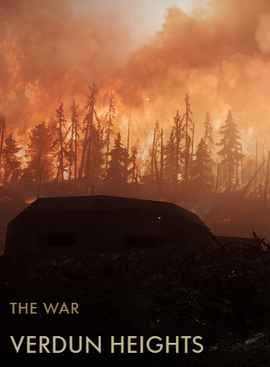 The main target for the German army during the battle of Verdun was not to capture the city itself, but the line of heights near the River Meuse known as the "Cotes de Meuse". Since antiquity, those heights had been a strategic stronghold, dominating the whole region. The Germans were initially able to cross the Meuse and drive the French out of their positions on the west bank, even advancing so far as capturing Fort Douaumont, but the battle for the heights further north soon became a living nightmare for the troops on both sides. Camouflaged machine-gun nests and relentless shellfire from French 75mm field guns tore deep holes into the advancing German infantry columns, at the same time as German flamethrower units and heavy howitzers smashed into the fortified French positions. Hills like Cote 304 and Mort Homme, the "Dead man's hill", became lasting synonyms for the truly unbelievable slaughter there, as the Germans tried to wrestle the heights from the French defenders by sheer force. Only after a 36-hour bombardment from 500 artillery guns (9th April 1916) were the Germans able to rout the broken French lines and take the two hills. The fighting on the hilltops was perhaps the worst of the entire war, with soldiers dying of thirst, and the wounded drowning in the mud.

Retrieved from "https://battlefield.fandom.com/wiki/Verdun_Heights_(Codex_Entry)?oldid=343336"
Community content is available under CC-BY-SA unless otherwise noted.