The Villar Perosa mod.1915 was an Italian double-barrel automatic weapon produced during World War I. Originally manufactured as a defensive armament for two-seat aircraft, it saw use by ground forces from 1916 onwards. Although not originally designed as such, the portable, pistol-calibre automatic has many characteristics of a submachine gun and can be considered one of the earliest examples to enter production.

The weapon consists of two automatic receivers connected side-by-side, with each being fed from its own top loaded 25 round magazine. Due to its lineage, the Villar Perosa lacks a conventional pistol grip or stock and instead has the spade-grip design of a crew-served weapon. Later in the war, some of these guns were dismantled and rebuilt as more practical infantry weapons, with one such design being the Beretta M1918.

As the Aircraft Gun that created the basis for the Automatico M1918, it has a high rate of fire, matching the fire-rate of the submachine gun that it based itself from, but limited effectiveness at long ranges due to the inability to aim down sights. While it can kill targets near-instantaneously, the weapon suffers from a slow reloading speed, as well as a constant need to reload due to the 25 x 2 round magazine. 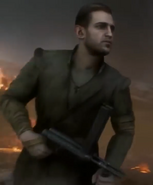 Pulling the left charging handle
Add a photo to this gallery

Retrieved from "https://battlefield.fandom.com/wiki/Villar_Perosa?oldid=340023"
Community content is available under CC-BY-SA unless otherwise noted.