Villers-Bretonneux is a Codex Entry featured in Battlefield 1. It is unlocked by winning any gamemode on Amiens.

THE SECOND BATTLE OF VILLERS-BRETONNEUX 1918Edit 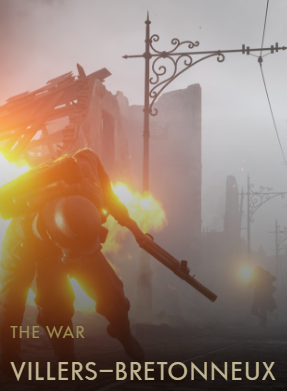 The sheer force of the German Spring Offensive in 1918 had stunned the British, pushing them back almost to Amiens before they could stop the Germans at the outskirts of the city. Amiens, as a logistic center and railway hub, was vital to the British war effort, and had to be held.

The Germans captured the neighboring village of Villiers-Bretonneaux and Amiens was bombed, but the German supply lines were stretched too thin to capitalize on their success and a British-Australian counterattack drove them away. But the Germans weren't finished; on April 24th, a German A7V tank appeared and broke through the British defensive lines, threatening Amiens.

Three British Mark IV tanks challenged it in the first tank-on-tank battle in history, and held them at bay long enough for a squadron of Whippet tanks to appear. They drove off the Germans and the Amiens sector was saved.

Retrieved from "https://battlefield.fandom.com/wiki/Villers-Bretonneux_(Codex_Entry)?oldid=343319"
Community content is available under CC-BY-SA unless otherwise noted.