Vittorio Veneto is a Codex Entry featured in Battlefield 1. It is unlocked upon winning one game on any gametype in Monte Grappa.

THE BATTLE OF VITTORIO VENETO 1918Edit 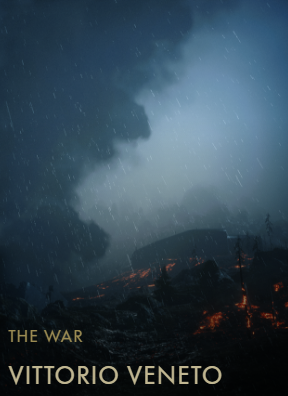 Monte Grappa occupied a strategic position on the Asago Plateau, overlooking the gateway to the plains of Veneto. Whoever controlled its heights controlled the area, and it saw its share of battles during the war.

In 1917, the Italians halted the Austrian summer offensive at the very peak, and by December the Austrians had been pushed off the mountain. Further attempts to take the mountain in the spring and summer of 1918 also failed, and Monte Grappa, by then the symbol of Italy's defense, would play a huge part in the final Italian offensive of the war, on Vittorio Veneto.

Brutal fighting finally forced the collapse of the Austro-Hungarian army and its retreat in late October 1918. Two thirds of the causalities of the offensive were inflicted around Monte Grappa itself.

Retrieved from "https://battlefield.fandom.com/wiki/Vittorio_Veneto_(Codex_Entry)?oldid=343325"
Community content is available under CC-BY-SA unless otherwise noted.