Walking Fury is a Codex Entry featured in Battlefield 1. It is unlocked upon obtaining ten kills with the Sentry kit. 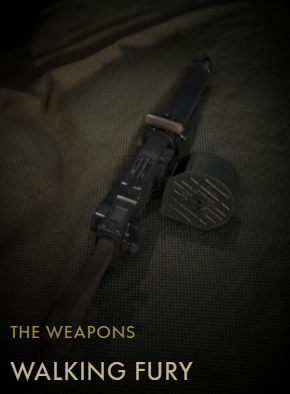 Germany was one of the first buyers and strongest believers in the new Maxim machine guns at the end of the 19th century, and soon they began producing their own version. They developed and lightened the design, leading ultimately to the MG08 in 1908, which would be Germany's standard machine gun at the outbreak of WW1 and widely used during the war.

The MG08 was a very heavy weapon with a large mount, intended for stationary defensive use. In 1915, as the need for more mobile fire power increased and German troops came up against much lighter automatic weapons on the Allied side, it was decided to modify the MG08 into a lighter and more portable weapon manned by a four-man crew in prone position. The new weapon would still be water cooled, but the water jacket was narrowed to contain less water. The receiver of the gun was made from thinner steel and the mechanism was simplified and had its upper part cut down., giving the gun a distinct profile. The receiver backplate with its spade grips was replaced with a wooden shoulder stock and a pistol grip, and instead of the heavy MG08 mounts it got a smaller bipod below the water jacket. The new design also got a mount for a new belt container - the Gurttrommel.

The new weapon got the designation IMG 08/15 (the lowercase "I" standing for leichte - "light", while a capital "L" stands for Luft - "aircraft version"). Prototypes of the 08/15 began testing in 1915, production began in 1916 and the first 08/15's were deployed at Verdun later that year. It became the most common German machine gun in WW1 with 130,000 produced during WW1 and by 1918 there were four times as many 08/15's as MG08's. At 18 kg the 08/15 was heavier than LMG's on the Allied side, but it was designed to be an assault weapon and training for it included how to properly hold and fire the 08/15 on the move to provide suppressing fire.

Retrieved from "https://battlefield.fandom.com/wiki/Walking_Fury_(Codex_Entry)?oldid=343181"
Community content is available under CC-BY-SA unless otherwise noted.