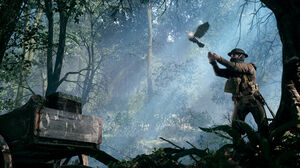 Find messenger pigeons and send messages to your supporting artillery to take out the enemies."

This item has a Codex entry: Unsung Heroes

War Pigeons is a gamemode introduced in Battlefield 1[1] in which both teams fight for control of a messenger pigeon.

War Pigeons is a 24 player game mode. Once a game starts, a pigeon coop is placed in a pre-determined location for the first spawn, after which the pigeon can spawn anywhere on the map. Players must locate the Carrier Pigeon before the enemy and carry it to a safe location.

The player must then write a message in order to send it off to call for artillery support. Players can write the message faster while staying still. The player then has to head outdoors and release the pigeon—the pigeon is vulnerable to weapons from this point until it reaches sufficient height. If successful, an artillery barrage will strike the enemy.

A standard game ends after one team manages to successfully release 3 pigeons. There is no time limit for this game mode. 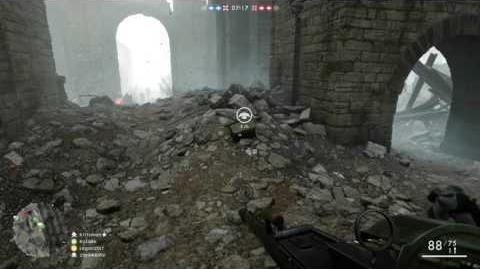