Anti-aircraft-rocket, was an anti-aircraft guided missile developed by Germany during World War II. It was developed from the V-2 guided rocket system. It was never operated in combat.

1
"The Wasserfall Missile was one of the first guided missiles ever created. From within its base, you can guide the Wasserfall toward its target, ensuring accuracy."

The Wasserfall is a German emplacement found on the maps Essen and Mimoyecques of the Secret Weapons of WWII expansion pack.

When entered, the user's view is moved to the missile's. The player can then change the missile's pointing direction before launch. As soon as the player fires, the missile is launched, and the player is given full control over it, similar to the TV Missile in later Battlefield games.

The missile is flown the same way as common aircraft (note that keyboard keys cannot be used to guide it). The player should aim to crash the missile into an enemy, be it an airplane, a tank, a boat etc. The missile will destroy any vehicle on impact and will also be destroyed in the process. It has a very small damage radius, relying on direct hits to destroy targets. However, debris from the destroyed missile travels fast enough to kill players and damage vehicles it hits.

The missile can also be manually destroyed (right click by default) or if it crashes into any other surface. The time the user is given control over the missile is limited, after which the missile will slowly fall to the ground. The missile travels very fast and can be difficult to control.

After launching a missile, the player has to wait several seconds before launching another one. He is, however, given an unlimited supply of missiles. The emplacement itself can take damage and is easily destroyed by explosives, like bombs and rocket launchers, after which it takes some time to respawn.

The Wasserfall emplacement in-game, with missile.

A render of the Wasserfall. 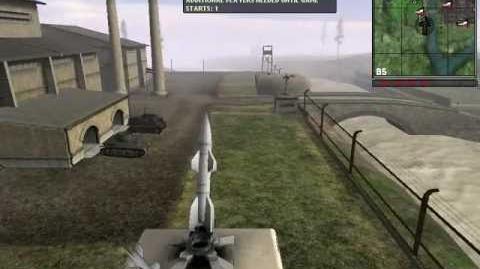 Battlefield 1942 The Wasserfall Missile
The Wasserfall system in use.
Community content is available under CC-BY-SA unless otherwise noted.
Advertisement