Webster Mackay is a specialist featured in Battlefield 2042. He is unlocked at level 15.

Born on CFB Cold Lake, Alberta, he was raised by a single father and was a classic army brat. Having lost his mother and moving constantly, he became more and more of a loner, comfortable relying on himself.

Following his father's footsteps, Mackay joined the Canadian military in his teens. At the height of his military career, he was a member of Joint Task Force 2 as a part of a counter-terrorism unit.

After retiring from the military, Mackay followed his dreams of exploring and living off the grid. He later joined the No-Pats as an assault specialist for the MFS-04 Exodus' Task Force. This was due to the realization of how much he and his survival skills could help as well as to make right a regret from his military days.

Mackay is described as an outdoorsman, nomad, and soldier. Mackay is an ass-kicker with a conscience. As a lone wolf, he will follow his gut before he waits for orders.[1]

"Fires a rope that attaches to surfaces. When attached, the rope is retracted and the player gets pulled towards the attach point."

Mackay comes equipped with the Grappling Hook as his specialty. Capable of firing a Grappling Hook, it allows him to quickly ascend various structures, or move quickly over shallow terrain.

The Grappling Hook has unlimited ammunition, limited by a modest cooldown. It can attach to most map elements (perhaps short of foliage). It can also inflict 50 damage against enemy infantry and Ranger drones, at risk of being reeled in with a miss.[2] The hook can even penetrate helicopter canopies to injure occupants.

After latching onto a suitable target, the gadget immediately winches the player towards it at roughly 20 meters per second.[3] The player has no control over the winching action beyond steering (← or →) or detaching (Jump). The player will automatically climb any ledges above the hook, and can parachute in instances where a landing might be unsafe. Should there be a window below the winch point, the player will instead crash through it (taking priority over climbing up to a ledge above). With careful aim, winching may counteract some falls, and can even propel a player above the launch point. The gadget takes longer to cool down after using the winch feature.

The Grappling Hook pulls the player towards the spot where the gun made contact with a vehicle.[4] Even appears to be the rocket on Orbital, which can drag the player along during launch, but may eventually exceed the winch speed if the player fails to reach the rocket.

The player appears to gain invulnerability to terrain-based damage, but may possibly continue to receive damage from vehicle collisions and falls (if the winch does not act quickly enough).

"Allows the player to move more quickly while aiming down sights, further enhancing their speed-related advantages.

Mackay comes with Nimble as his trait. This allows the player to move more quickly while aiming down sights with the exception of NTW-50, further enhancing their speed-related advantages. This and his gadget allows him to be extremely mobile.

Mackay swings into action during a flash flood in Rio. His days as a survivalist rappelling off cliffs seem to have paid off. 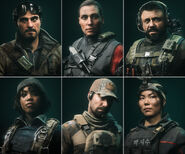 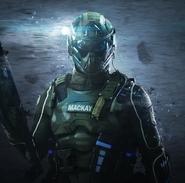 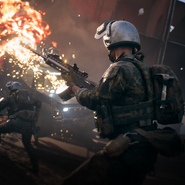