Battlefield Wiki
Register
Don't have an account?
Sign In
Advertisement
in: Silver, Factions of Battlefield 1942, Military Unit,
and 2 more

The Wehrmacht (English: Defense Force) was the unified armed forces of Nazi Germany, combining the Heer (army), the Kriegsmarine (navy) and the Luftwaffe (air force). With German Elite Forces being an unspecified elite force within the Wehrmacht.

In Battlefield 1942, the Wehrmacht is a part of the Axis, fighting the United States Army, British Army, Canadian Army, Free French Forces and the Red Army on multiple fronts in Europe.

It is one of the three German factions in game; with the others being the Afrika Korps and German Elite Forces.

Unlike all other factions, the Wehrmacht uses only indigenous equipment.

The Wehrmacht wear field grey tunics with black Y-harness web gear, which may also includes brown leather ammo pouches and a pistol holster. They have black boots, and wear on their heads the distinctive stahlhelm in dull gray, with an insignia on their left and right side. In general, the faction does not carry backpacks with the exception of the Engineer, as well as the Scout kit, which is equipped with a portable radio.

The Wehrmacht uses exclusively indigenous equipment with the sole exception of their Armored Car, which is Italian.

Vehicle wise, all of Germany's vehicles are painted in a solid dark grey camouflage.

Wehrmacht soldiers assaulting a position during the Battle of the Bulge

Germans during the Battle of the Bulge

Germany is in Battlefield V. It was one of two factions available at launch, along with the United Kingdom.

Germany is the main enemy faction in the singleplayer, encountered in the 1940, 1942 and 1944 sections of My Country Calling, Under No Flag, Nordlys and Tirailleur war stories, while friendly forces appear during The Last Tiger.

The faction has have several soldier types of both normal and elite variety, with the latter having higher health, better weapons and a unique appearance - regular enemies wear gray or khaki uniforms and standard stahlhems, while elites may be identified by their darker camouflage patterned clothing, non-standard headgear and frequent use of face coverings. Additionally, in Tirailleur some Germans appear to be Fallschirmjäger units, identified by their unique autumn camouflage and paratrooper helmets. Germany is also the enemy faction encountered in Basic Training.

Germany is the sole enemy faction in the co-op mode of Battlefield V, Combined Arms. Their soldier types, equipment and appearance are generally identical to the faction's appearance in singleplayer. 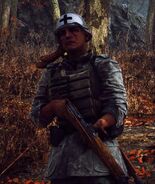 Regular Support found in Under No Flag 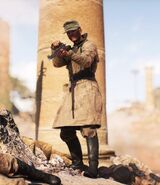 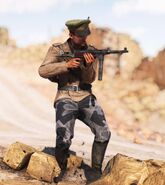 In the Multiplayer, Germany is one of the two launch factions, opposing the United Kingdom in the Western, North African, Norwegian and Balkan fronts, as well as the USA in North Africa, France and Belgium.

The faction uses German vehicles and German language voice overs. However, the faction may be an amalgamation of several other European Axis powers as such as Italy, similar to the United Kingdom which is British-based but includes cosmetic items and personnel from Free France.

Like Battlefield 1942, the Wehrmacht uses predominantly German-made equipment, with the exception of their early war light tank which is Czechoslovakian.