The Welsh Blade is a Codex Entry featured in Battlefield 1. It is unlocked upon obtaining 10 kills with the Welsh Blade. 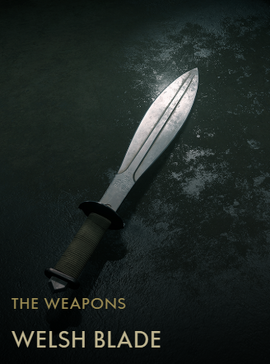 The "Welsh Blade" was a leaf-shaded dagger, designed by armored Felix Joubert and distributed among British trench raiders, machine-gunners, and bombers at the Battle of Messines in June 1917. Its blade was much broader and thicker than most knives, making it more of a slashing weapon. Outfitted with a hand guard, a wrist-loop, and a "skull-cracking"-pointed pommel, the weapon was a robust addition to the arsenal of close combat trench weaponry.

Retrieved from "https://battlefield.fandom.com/wiki/Welsh_Blade_(Codex_Entry)?oldid=343265"
Community content is available under CC-BY-SA unless otherwise noted.