What Century is This? is a Codex Entry featured in Battlefield 1. It is unlocked upon obtaining ten kills with Cavalry weapons. 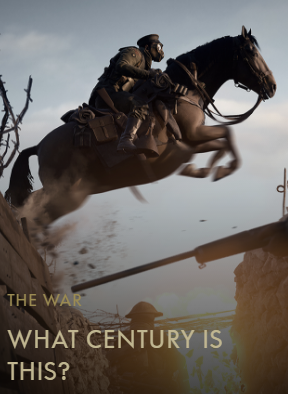 Heavy armored cuirassiers, swift lancers, and deadly hussars were the dominant shock weapons of the battlefields of old. But in the Great War they charged in vain against barbed wire and machine guns. As the war on the Western Front turned into a stalemate, cavalrymen had to dismount and follow their comrades into the trenches. It was different in the vast open spaces of Eastern Europe, where Cossacks and uhlans were still able to act as vanguards and shock troops.

In the Middle East, the rebels of the Arab Revolt and their Ottoman adversaries relied on the speed and endurance of their horses and camels. Unforgotten are the fearless assaults of the Australian Light Horse Brigade, sabers in hands as they charged as Beersheba in 1917 under heavy artillery and machine gun fire. When motion returned to the Western Front, so did cavalry to the fields of battle. Once the Hundred Days Offensive finally broke the stalemate for good in 1918, mounted troops attacked straggling men and unprepared defenses once again.

Retrieved from "https://battlefield.fandom.com/wiki/What_Century_is_This%3F_(Codex_Entry)?oldid=343307"
Community content is available under CC-BY-SA unless otherwise noted.