Where Eagles Dare is a Codex Entry featured in Battlefield 1. It is unlocked upon defeating ten enemies with your a sidearm in the chapter O Tutti Accoppati in the singleplayer mission Avanti Savoia!

AIR COMBAT IN THE ALPSEdit 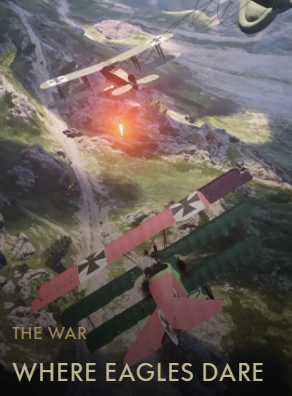 Sometimes numbers tell stories. During the 1918 Battle of Vittorio Veneto on the Italian front, some 700 Italian, French and British aircraft faced around 500 Austrian and German enemies in the air. They flew around 2500 missions at an average rate of 700 flights per day, dropping 200 tons of bombs, shooting down 32 enemy fighters and 11 balloons and firing over 300,000 bullets at enemy troops.

The Italians also gathered mass fighter formations of 120 planes acting as moving barriers in the skies.

Retrieved from "https://battlefield.fandom.com/wiki/Where_Eagles_Dare_(Codex_Entry)?oldid=343411"
Community content is available under CC-BY-SA unless otherwise noted.