"Of Course it is. One more death for me to live with."

Whitehall is a character featured in the campaign of Battlefield 1. He appears in the mission The Runner as the commanding officer to Frederick Bishop and Jack Foster.

Whitehall is first seen talking to Frederick Bishop about his new partner Jack Foster. Bishop, a seasoned veteran, did not want the young soldier at his side as was not only a liability but Bishop did not want the death of another young man on his conscience. As a result, he asked Whitehall if he could get Foster out of the upcoming battle. Whitehall responds by telling Bishop that Foster lied about his age to get past conscription to see the "Pride of Australia" and that for the time being, he would have to deal with the situation.

Later after making a successful landing on the beach and taking the hill, Bishop and Foster rendezvous with Whitehall. Bishop proceeds to ask Whitehall what they can do for him, only for Whitehall to exclaim that he wants Foster to be a runner for the frontlines. Bishop, knowing his inexperience would most likely get him killed, volunteers to take Fosters place. Annoyed by Bishops offer, Whitehall accepts and tells Bishop to get the report from the frontline while Fosters stays with him.

After retrieving the report, Bishop makes it back to Whitehall's makeshift command center, only for Foster to shoot past him and save his life from an Ottoman soldier. Whitehall barrages into the room afterward, complimenting Foster over his shot. Bishop informs him that they are suffering massive casualties across the frontline, confirming Whitehall's suspicion. He then tells Bishop to inform rear command that their battalion will be moving up.

Upon arriving at rear command, Bishop finds it deserted. Moving inside the building, he finds a note stuck to the wall with a knife telling how the allied position is lost and that artillery will be launched on the village and outlying forts to cover the retreat back to the beach. Worried about Foster, Bishop rushes back to Whitehall in order to inform him of the situation, being met with heavy resistance from the Ottomans along the way.

Bishop finds Whitehall inside the village church who orders him to help defend their position. After successfully doing so, Bishop tells Whitehall of the full scale retreat and incoming artillery. Not knowing of the retreat, Whitehall tells Bishop that he had sent men to capture the nearby fort. Knowing that it was a suicide mission, Whitehall only asked for volunteers to participate, so naturally Foster volunteered. 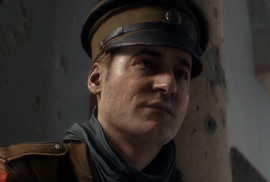 Unable to leave Foster to perish, Bishop tells Whitehall that he will go rescue Foster and the rest of the men. Whitehall, knowing that doing this is a violation of their order to retreat, tells Bishop that he'll act as if he didn't see him. Bishop responds by saying that none of this was his fault, only for Whitehall to say that it was and that they will be more deaths that he'll have to live with. He then orders Bishop to leave as time was running out. Afterwards Whitehall orders his men to retreat back to the boats at the beach before the artillery starts firing.

Retrieved from "https://battlefield.fandom.com/wiki/Whitehall?oldid=358412"
Community content is available under CC-BY-SA unless otherwise noted.