Born in Cape Town, South Africa, Casper turned to nature and distance running to manage his anxiety and depression. He later became an intelligence gathering officer in the 5 Specal Forces Regiment before being transfered to MONUSCO to conduct peacekeeping missions. He experienced the pain of global refugees first hand when his entire family was killed by the Cape Town tsunami.

After stumbling onto a conspiracy involving a senior officer that put the lives of those of his unit and local civilians in danger, Wikus was falsely accused of murder and fled the country. He aligned himself with the No-Pats and joined the the MFS-04 Exodus' Task Force as a Recon Specialist. He hopes of being able to one day return home if there is still a home to return to.

Solitary by nature, Wikus is fiercely loyal to those he considers his friends. He is described as introverted, anti-social, unflappable, and calm in the presence of the Task Force. Wikus is a master of camouflage and long-range engagement.[1]

Casper is equipped with the OV-P Recon Drone as his specialty gadget. It is a camera-equipped bi-copter drone with a vaguely bird-like appearance. It functions somewhat similarly to the MAV from Battlefield 3 and 4.

While using the drone, any enemies near the reticle are automatically highlighted (at least for the player). Enemies can be marked with the Spot button. Spotting performance has been significantly decreased compared to Battlefield 4, with players needing to be at a closer distance than before. (The Sensor Array on certain vehicles offers better performance, but also has a lower limit than the MAV drone.)

The OV-P carries an EMP dart launcher for temporarily disabling enemy vehicles for five seconds. Vehicles experience effects such as reduced speed, disrupted HUD, and disabled weapons. The player must first lock onto the enemy vehicle by holding Aim before the dart can be fired. The locking feature has limited range (perhaps 50 meters), placing the drone within range of return fire. The locking feature also prevents the player from using the feature against infantry.

Players may also attach C5 Explosive to the drone as an improvised explosive device. If destroyed, a new drone will be available to deploy after a 30 second cooldown.

Casper features Movement Sensor as his trait, a sensor suite attached to his outfit that scans his surroundings for enemy presence. The Movement Sensor shows in the HUD as a flashing circle at the bottom of the screen. Should an enemy come within range, the circle will turn red, increasing in number as the enemy approaches. While operating the OV-P Recon Drone, the Movement Sensor will be displayed on the drone's HUD if any enemy is within range of the player.

Casper is neither seen nor heard by the warlords about to meet their end. 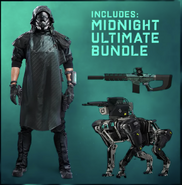