The Willys MB, or Jeep, was the primary scout car for the Allied Forces in World War II, used by British and Commonwealth Forces, the American Army and the Red Army as part of the Lend-Lease program. 361,339 were built by Willys before the end of the war along with 277,896 nearly identical Ford GPWs.

The Willys MB is a scout car in Battlefield 1942 issued to all the Allies factions with the exception of the Canadian Army, who are issued the Lynx instead. It can only carry the driver and one passenger. The vehicle has very little armor, and both passengers are exposed to gunfire. As neither the driver or passenger can use any weapons, it is advised to avoid direct combat. However, the Willys MB is fast and maneuverable, and is readily available on most maps. It can also climb steep hills with relative ease. This makes it useful to quickly transport two players across the battlefield, especially considering the large distances between flags common in Battlefield 1942.

The front of a RAF jeep

The rear of a RAF jeep

The front of a British jeep

The rear of a British jeep

The front of a US Armed forces jeep

The rear of a US Armed Forces jeep

The front of a Red Army jeep

The rear of a Red Army jeep

Driver
2 Passengers
The Royal Jeep is a transportation vehicle featured in Battlefield Heroes for the Royal Army and is the counterpart of the National Jeep. The Jeep can seat three players, one driver and two passengers. The driver maneuvers the jeep and can use the horn while the passengers can use their weapons and/or abilities to attack enemy infantry and vehicles. The vehicle lacks any mounted weapons but its fast speed makes it much easier to obtain Roadkills than other vehicles. 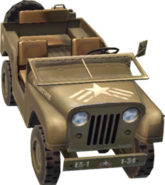 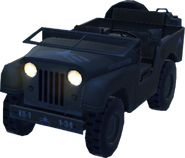 The Royal Jeep at night with its headlights on

A side view of a Royal Army Jeep

A rear view of a Royal Army Jeep

Light
The Willys MB is a vehicle featured in Battlefield 1943. It spawns regularly at certain USMC controlled flags. They're very fast and maneuverable, but have weak armor, as 1 or 2 rifle grenades can take one out. An M1919 Browning is even capable of taking it out, however it is very difficult to do so. It also has very little protection for the driver and passengers. However, they're the fastest land vehicle in the game, along with the Type 95 Kurogane. It can transport 3 players: one driver, one passenger (capable of using all of their infantry weapons) and one gunner (manning an M1919 Browning).

A US Marine driving a Willys MB in Iwo Jima.

Personal Equipment
(Armed Version, Seats 3; Unarmed Version; Seats 2-4)
"By 1940 the US Army's need for a light 4x4 vehicles was clear. With efforts from a handful of manufacturers the design of the jeep was finalized and production of the cross country reconnaissance vehicle could begin."

The GPW is a vehicle featured in Battlefield V as part of the War in the Pacific Tides of War chapter. It serves as the light transport vehicle of the USA, counterpart to the Type 95 Car used by the Japanese, and the Kubelwagen of the German faction.

There are two versions of the GPW. The most common is the unarmed, four-seater version that appears on all Pacific maps as well as Al Marj Encampment and Provence. The armed version seats three, with the second passenger controlling a pintle-mounted M1919 from the truck bed that can rotate 360°. In both versions, passengers may use their personal equipment and weapons while being transported.

Possessing right-angled bodywork with few protrusions, the GPW presents a smaller target than the Kubelwagen and especially the Type 95 for the same statistical capabilities. However, passengers are highly exposed to small arms fire because of its seat height and open cab, on top of the vehicle's low health. The primary functional difference between it and the Type 95 is that the GPW features a pivoting windscreen, which folds down when a player first enters the front passenger seat to allow for unobstructed firing.

The GPW sports either an olive drab or khaki paint scheme depending on the theatre it is deployed in.

20
"The primary, light-armored "scout" vehicle for Allied forces. It seated a driver and one passenger."

The Willys MB is a vehicle featured in Battlefield 2042. It is available exclusively in the Battlefield Portal on Battlefield 1942 maps. Serving as the Allied counterpart of the Axis' Kübelwagen, it functions in a similar manner to past installments.

The vehicle can seat two players, a driver and a passenger and offers moderate speed and maneuverability.