Women's Battalion of Death is a Codex Entry featured in Battlefield 1, introduced in the Battlefield 1: In the Name of the Tsar expansion. It is unlocked upon winning a round on Volga River. 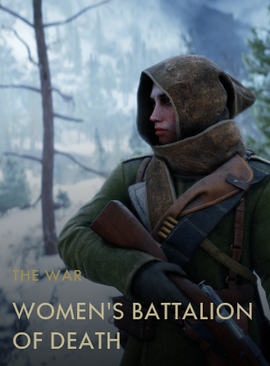 Maria Bochkareva had been a soldier since 1914, after personally petitioning the Tsar to be allowed to fight, as women were not allowed to officially join the Imperial Russian Army. Then, in 1917, when the February Revolution began to tear that army apart and many war-weary men simply deserted, the now decorated war hero Bochkareva sent a request to Minister of War Alexander Kerensky to form the first Women's Battalion of Death. While Kerensky saw the strong propagandistic potential of the patriotic Death Battalions, Bochkareva was determined to create a viable fighting force, equal to those of men and exemplary in their willingness to die for Russia. Of the 2000 women who initially volunteered, only 300 completed Bochkareva’s tough training regime. Her battalion occupied active frontline trenches and went over the top during the Kerensky offensive in July 1917, they fought well, but suffered heavy losses. Bochkareva herself was wounded by shellfire. Other battalions were formed after this, but recruits were often discouraged by the constant hostility of the men at the front, many of whom looked down on them simply for being women. Others saw them as tools of the war ministry, and by the end of the year, and the October Revolution, they had been dissolved. An estimated 5,000 women in total served in these units, though only Bochkareva’s saw frontline action in the First World War.

Retrieved from "https://battlefield.fandom.com/wiki/Women%27s_Battalion_of_Death_(Codex_Entry)?oldid=343350"
Community content is available under CC-BY-SA unless otherwise noted.