Women Rise is a Codex Entry featured in Battlefield 1. It is unlocked upon collecting all Field Manuals in the chapter Young Men's Work of the singleplayer mission Nothing Is Written. 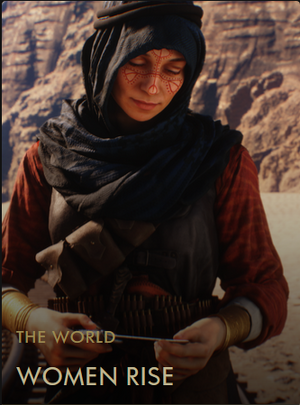 Contrary to the stereotype of weeping and waiting at home while the men were away fighting, women served the war effort of their nations in huge numbers. They were munitions factory workers, nurses, airplane mechanics, and spies. They were Vera Brittain and Mata Hari. Some risked their lives working with dangerous chemicals for munitions, becoming known as 'canaries' for the yellow tint the sulphur gave their skin.

In addition to military work, the percentage of women in the civilian labor force nearly doubled in some nations, but grew in all. And indeed, some even fought at the front. Flora Sandes, Milunka Savic, Helen Ruz, Olga Kokovtseva and of course - the Russian Women's Battalion of Death, led by Maria Bocharevka.

They were vital to propaganda efforts, and in many countries the taking on of traditional male roles was the final push toward giving women the vote. Britain, Germany, Russia, Poland, the U.S.A., and Austria all granted women suffrage shortly after the war.

Retrieved from "https://battlefield.fandom.com/wiki/Women_Rise_(Codex_Entry)?oldid=343252"
Community content is available under CC-BY-SA unless otherwise noted.