The XM22, also known as the Stoner 63A, is an American modular weapon system designed by Eugene Stoner, L. James Sullivan, and Robert Fremont in 1963. The Stoner 63A was a developmental weapon issued in limited numbers to United States Navy SEALs during the Vietnam conflict designated the Mk. 23 Mod 0 or XM207. It used a 5.56x45mm NATO cartridge with a belt-fed feed system and had a rate of fire of 700-1000 rounds per minute and an effective range of between 200–1100 meters/220-1200 yards.

[1]
"A modular weapon system designed in the 1960s. This weapon saw action only as part of certain teams of U.S. Navy SEALs. Complexity and high maintenance doomed the project, despite good performance in the field."

The XM22 is a weapon featured in the Battlefield: Bad Company 2: Vietnam expansion and issued to the Medic. It performs much like the M249 in the base game, with its 200-round capacity and high rate of fire.

Despite having the fastest firing rate of the three LMGs in the expansion it also has exceptionally low recoil. The sights are very clear and enable it to be used for long range burst firing.

Reloading the XM22.
Add a photo to this gallery 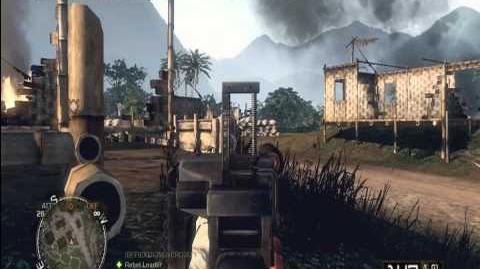 XM22
Gameplay with the XM22 in Battlefield: Bad Company 2: Vietnam at Operation Hastings and Phu Bai Valley in Rush mode
Add a photo to this gallery

Retrieved from "https://battlefield.fandom.com/wiki/XM22?oldid=363046"
Community content is available under CC-BY-SA unless otherwise noted.