For other uses of XM8, see XM8 (Disambiguation).

The XM8 was an experimental assault rifle produced by German arms manufacturer Heckler & Koch for a replacement for the aging M16/M4. Testing began in 2003, but the project was canceled in 2005. However, HK marketed the rifle worldwide, resulting in its adaption by the Malaysian PASKAL unit in 2010.

The XM8 is made entirely from polymers, which allows the weapon to be light as well as durable. It has a rate of fire of 750 rounds per minute, and fires the 5.56x45mm round, which makes the XM8 very effective at medium to long ranges. While not designed with Picatinny rails, the XM8 can fit an XM320 grenade launcher to the underside of the handguard, as well as being able to fit optics to the top of the carrying handle using a special adaptor.

Variants of the weapon as designed by H&K include the XM8 LMG and XM8 Compact.

Battlefield Bad Company Official Prima Guide
"Experimental US weapon system based on the German G36 assault rifle. A highly accurate and dependable weapon with many "in the field" modification options. Despite its great performance, it never left the experimental phase. "

The XM8 is an assault rifle featured in Battlefield: Bad Company.

The XM8 is mostly used by the Legionnaire Mercenaries. It is first encountered as a collectible in Welcome to Bad Company, where the rest of the squad suggests Marlowe looks inside a small house. After that, it can be picked up from dead Mercenaries or in weapon collectible crates.

The XM8 is issued to the Assault kit as an unlockable. It is fully automatic and its stats are seemingly average except for above average accuracy, making the XM8 very balanced. The weapon's only major downside is it's longer reload compared to the other assault rifles, but this can be mitigated by preforming a weapon switch to cut off the cocking animation. The XM8, like many other Assault Rifles, has open sights. It uses a 50-round magazine, with 150 rounds in reserve, and has a specialized grenade launcher, the XM320, attached to the weapon. It normally takes about 7-8 body shots to kill.

The XM8 in Battlefield: Bad Company's multiplayer at Deconstruction

The XM8's iron sights
Add a photo to this gallery

"An experimental US military project, the XM8 P fully automatic rifle was created with unique versatility, allowing the operator to perform quick repairs and barrel changes in a hot spot."

The XM8 Prototype is a weapon featured in Battlefield: Bad Company 2.

The XM8 Prototype is the first gun the player receives once taking control of Marlowe. Bad Company seems to have adopted it as their primary assault weapon since it is used by Redford and Haggard, and Marlowe in cutscenes. The XM8 is always equipped with a scope (the version Marlowe uses), but the unscoped version can be found by a fallen Marine laying next to the fence by the ambush point in the level High Value Target. There is another fallen Marine by the humvee, but the player cannot pick up the weapon from him. Follow the fence and the player should see another deceased Marine and his weapon laying beside him.

The XM8 Prototype requires 3000 points to be unlocked for the Assault kit. The XM8 is fully automatic and has 30 rounds in a magazine. The gun is well balanced, having medium accuracy, above average damage and a steady rate of fire. It has the XM320 grenade launcher attached and a red dot sight or 4x scope can be attached to the weapon. With the 4x scope the XM8 can prove very effective at medium to long range. As such, it is very common online.

It is very effective at all ranges and remains competitive with SMGs at close range. However, to maintain accuracy, burst firing the weapon manually is recommended, because there is a considerate recoil when firing fully automatic at range. The recoil of this gun resets before the visual recoil does, especially when using iron sights. Therefore, firing a second burst just before the sights line up again will still hit the target and can give you a higher chance in winning a firefight at medium range. 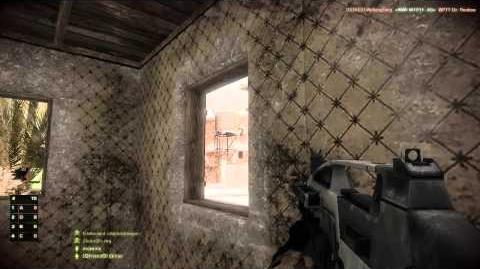 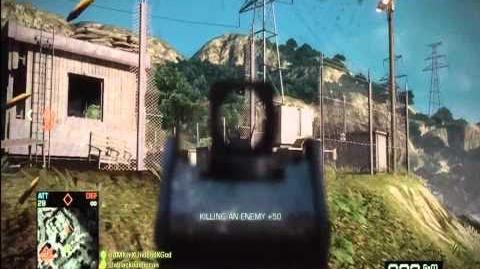 XM8 Prototype
Gameplay with the XM8 Prototype in Battlefield: Bad Company 2 at Valparaiso in Rush mode
Add a photo to this gallery

The XM8 Prototype is a weapon in Battlefield: Bad Company 2 iOS.

The XM8 Prototype's 4X scope being aimed down in the iOS version of Bad Company 2.
Add a photo to this gallery

The XM8 is a purchasable assault rifle featured in Battlefield Play4Free for the Assault Kit. It features a 24-round magazine, decent damage output, low recoil, high accuracy and open iron sights. However, it is offset by its long reload and moderate overall damage.

It can be purchased for either 300

to have forever for credits,making it as expensive as the 416-Carbine. It can also be purchased for 69

to have forever with Play4Free Funds. It can also be purchased for 6,869

to use before it unlocks at Level 22 to use forever.

The XM8 Prototype in gameplay.

More detailed look upon the XM8.

Render of the XM8.

A 3D model of the front side of the XM8.

A 3D model of the rear of the XM8.
Add a photo to this gallery

Retrieved from "https://battlefield.fandom.com/wiki/XM8?oldid=363070"
Community content is available under CC-BY-SA unless otherwise noted.