The XM8 Compact is a variant of the XM8; it has a short 9-inch (228.6mm) barrel, personal defense weapon (PDW) configuration, a folding stock or buttcap receiver cover, and several personal defense applications.

The XM8C can be found as a collectible in the level Crossing Over. It will be located on the roof of a building in the Harbor.

The XM8C is issued to the Specialist kit and costs one unlock point to use. The weapon is preferred by players due to its high rate of fire, decent damage, and effectiveness at longer distances.

Due to its relatively medium range based stats, this weapon can over-power many weapons from a distance, especially shotguns and other Specialist weapons, but can be outdone by these weapons at close range. Another one of its main downsides is that it has a slow, cumbersome reload, much like the XM8, making it advisable to try and deal with any threats before taking cover and reloading. An interesting note about the weapon is that when you walk over an Assault kit with this weapon, it replenishes your ammo. The XM8C is unlocked at the final level, 25, General of the Army, or included with the Gold Edition.

The XM8C in Battlefield: Bad Company on Ascension

"This compact variation of the XM8 was designed by H & K for personal defense during close quarter battles. It also boasted modularity options allowing for repairs and barrel changes."

The XM8 Compact is a weapon featured in Battlefield: Bad Company 2 for the Engineer kit. It can be equipped with a Red Dot Sight or a 4X Rifle Scope, although it has very clear iron sights. It has moderate recoil, and comes equipped with a suppressor and 30 round magazine.

The XM8 Compact at Port Valdez in Conquest. 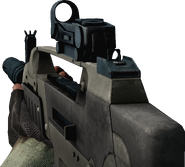 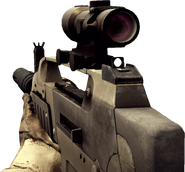 The XM8c is a weapon featured in Battlefield Play4Free for the Engineer kit. It features decent range packed with low recoil and high accuracy. However, it is offset by its long reload time and low overall damage.

The XM8 Compact in gameplay.

Suppressor
"The light and compact version of the standard XM8 rifle is a solid weapon of choice for CQB engagements."